Anniversaries III: The Man in Black

Share All sharing options for: Anniversaries III: The Man in Black 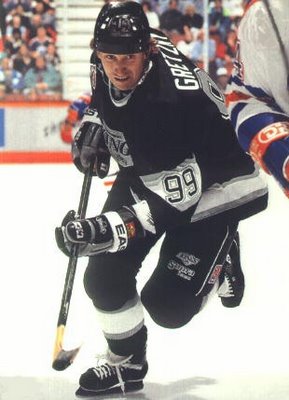 Not all memorable occasions are happy ones. They tend to run the gamut of emotions, something reflected admirably in our iconic national sport.


It was an almost surreal event, and as a result (?) my memories of the details of the game itself are rather more shadowy than usual. I remember more the richly complex overtones of resonant emotions. It was a visual confirmation of the Worst possible news, namely the Second Gretzky Sale that had gone down ten weeks earlier. An annual rumour involving the Rangers had become a harsh reality involving, of all teams, the Kings. Since the last time I had spotted Wayne in the flesh, receiving the Stanley Cup and the Conn Smythe Trophy and beginning the tradition of the team photograph, I had seen -- all on TV -- the wedding to the Hollywood actress, the tears at Molson House when "I promised Mess I wouldn't do this", the happier donning of a (thankully, renovated) Kings jersey hours later, his first game in his new home in which he scored on his first shift and set up three later goals in a laugher over the Wings. I was laughing too ... when I wasn't crying. My loyalties were now divided more than at any time since the WHA Oilers and the NHL Leafs vied for my support. I had been and remained (and remain) a huge Gretzky fan. Having seen virtually every one of those 500+ home games I am convinced he is the closest thing I have personally witnessed to pure genius, in any walk of life.


So I looked forward to October 19, 1988, as the first in a suddenly dwindling supply of remaining opportunities to witness this genius in the flesh. I felt compelled to the rink early, went down to the Kings end in plenty of time to witness the pregame skate, and was astonished to find the whole lower sections full, everybody standing, everybody gawking, everybody seemingly silent and expectant as if the high priest was about to enter. The cheer when the Great One emerged was the loudest I had heard in a pregame warmup since unlikely hero Andy Moog led the 1981 Oilers out of the tunnel with an equally unlikely 2-0 series lead over the Montreal Canadiens. Every eye in the house followed Gretzky as he circled around, obviously a little uncomfortable in his erstwhile home, looking very out-of-place in black. For a few minutes Gretzky hunched by the boards just on the Kings side of centre, and a few Oilers -- Messier, Kurri, Fuhr -- "happened" to take turns doing the same.


The game started at a frenetic pace, several minutes without a stoppage with spectacular end-to-end action. The crowd oohed and ahhed with the intensity of a Stanley Cup game or one of that era's "exhibition games" against Russians. After a number of near misses/great stops at both ends, Glenn Anderson -- ever one to rise to the occasion -- scored a beauty to open the scoring, and give the Oiler faithful a chance to express who they were really cheering for. The roar shook the building.


The Oilers new captain, Mark Messier, was never one to shrink from an occasion, and he dominated the game with (IIRC) 2 goals and 2 assists, leading the Oil to an entertaining 8-6 victory. He also landed a relatively gentle but no less meaningful body check that bounced the Great One on his great ass.

Gretzky himself had what I considered a below-average (for him!) performance, nonetheless garnering 2 assists, a magic trick I had seen him perform many times before. No doubt having his old linemates Jari and Esa on the line defending against him was a difficult new challenge for Wayne, but my impression was that his own rich blend of emotions on that occasion left him feeling relatively ambivalent towards that particular game. I certainly felt that way.

During the first intermission I was briefly interviewed by a roving reporter from the Edmonton Journal (could have been Staples for all I know) who was polling fans for their impressions. My take: "Have you ever experienced one of those unsettling dreams, the ones that are correct in almost every detail, but somehow something is not quite right?"

After its explosive start, the game on the ice became secondary to The Game, the one that had changed forever with the stateside departure of the van Gogh of hockey. On this night at least he was Dali, his apparition as surreal as a soft watch. I felt a deep sense of personal loss, even as I valued tonight's game featuring Gretzky as a visitor. For fans almost anywhere else, I realized, that was as good as it ever got. We still had four home games a year against the Kings, and the two teams were to meet in the playoffs for the next four years running until the Oilers roster became unrecognizable. And I knew I would always have my memories of his remarkable contributions to one of hockey's great dynasties, memories which I (mostly) cherish to this day.

For me it took a full year to let go, a remarkable year that included Edmonton hosting the 1989 All-Star game with Gretzky naturally the captain of the home Western Conference team and almost as naturally copping MVP honours; the Kings eliminating the Oilers in the playoffs with Wayne himself scoring two goals in Game 7; the unveiling of the statue before a partisan Coliseum crowd in the summer of '89; and the 1851 game that October detailed here. All were bittersweet, perhaps none more so than that unreal night twenty years ago when hockey's greatest hero returned wearing a black hat.