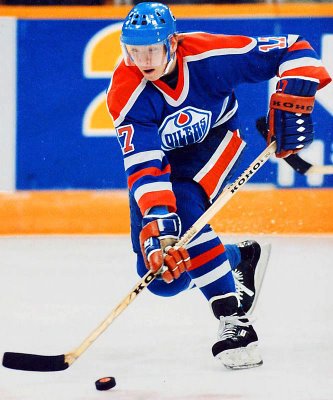 This didn't really fit thematically with the Gretzky/Messier post, but today, October 15, also marks the 25th anniversary of the Olympic Saddledome in our sister city of Calgary. Three years after blowing into Alberta on the hot winds of success up in Edmonton, the Flames were finally emerging from the bandbox known as the Calgary Corral and truly joining the major leagues. (The Corral had a capacity of just 7243, and dedicated fans paid full season prices for the right to go to half the games in a unique, shared-seating arrangement for those three years while the Saddledome was imagined, financed and built.)

Anyway, come the night and who better to line up opposite the Flames than their provincial rivals, the Edmonton Oilers. The Oilers had had by far the better of the Flames up until then, including an overwhelming Oilfire in the 1983 Smythe Final. The Oilers set a still-standing record of goals scored in a five-game playoff series with 35, including demolitions of 10-2 in the Corral and 9-1 in the Coliseum. Somehow, the Flames snuck out the intervening Game 4, 6-5, in the last NHL game played in the old Corral.

The Oilers would not make that mistake again on October 15, 1983. Jari Kurri (pictured) struck in the first period for the first-ever goal in the Saddledome (using stick D, also pictured :), on a pass from Wayne Gretzky (pictured elsewhere :). The Oilers went on to win the first ever game in the bow-legged building, 4-3.

Winning the Grand Opener at the Saddledome was an early step of a memorable season, the fifth game of a seven-game season-opening winning streak that remains a club record. Those 1983-84 Oilers would go on to win the league by 15 points, then beat the Flames again in the Smythe Final in a stern, seven-game test. The Oilers' overwhelming victory under the shadow of disaster in Game 7 would be the springboard to their first Stanley Cup.

I've always thought those Saddledome Flames did a little better job battle-testing the Boys on the Bus than the Corral Flames ever had, for whatever reason. The Oilers became a better team as a result.

Congratulations to hockey fans in our sister city on the 25th anniversary of your showpiece stadium. That your silver anniversary should include reminders of such legendary hockey names as Jari Kurri, Wayne Gretzky, and the 1983-84 Edmonton Oilers delivering the historic moments is a true feather in your cap.

Best of luck to the Calgary Flames this upcoming season.