Anniversaries I: A special time

Share All sharing options for: Anniversaries I: A special time 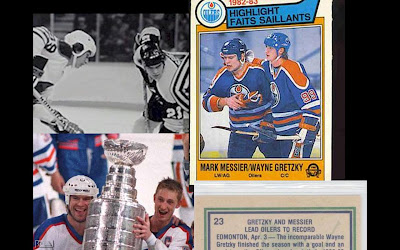 As the Oilers celebrate their 30th anniversary (sic) season, this is as good a year as any to reflect on our local franchise's storied past. Hey, it's not like we old geezers need much of a reason to remember the Good Old Days (TM). Especially an old geezer with a new blog.

This week marks a number of important anniversaries in the Oilers NHL history, several of which involve the two gentlemen pictured above. The two are irrevocably linked, from their start in the World Hockey Association (that’s a Cincinnati Stingers uni in the upper left pic) to the glory days scoring, breaking records, and winning together in Edmonton (clockwise from upper right :) to winding down their careers in Manhatten to their current status as the top two scorers in the history of the NHL. WHA prehistory notwithstanding, those points starting counting for keeps in October of 1979.

October 13 : It was my best birthday present ever. I had followed the NHL closely since the age of 7, but circumstance had precluded my ever attending a single NHL game, so what was a first for my adopted home of Edmonton was a first for me as well. Any doubts that the NHL was Really Here were instantly dispelled at the familiar sight of the elegant red-and-white unis of the visitors. The Detroit Red Wings were a fitting opponent whose own storied history had been intertwined with Edmonton's, as the Edmonton Flyers of the Western Hockey League had been a feeder team of the Red Wings for many years. In the year of my birth, both Red Wings and Flyers had won the "double", champions of both regular season and playoffs in their respective leagues. That Flyers' squad featured the likes of Glenn Hall, Al Arbour, Norm Ullman, Johnny Bucyk and Bronco Horvath, perhaps the greatest team to grace the River City. Until now.

But the new hometown heroes were no longer a farm team in a lower tier, they had entered the League as equals and ended the night with a 3-3 tie to prove it. Goals by personal favourite B.J.MacDonald staked Oilers to 1-0 and 2-1 leads, but the Red Wings rallied late and were poised to send the crowd home disappointed. Lightning struck late in the third, when the Oilers' 18-year-old rookie Mark Messier made a centring pass which glanced off the skate of a Wings defender and past the helpless goalie, giving the Oilers a well-deserved split in the points. It was the first goal of Messier's NHL career, and already one more than I had expected from the loosey-goosey youngster at the start of training camp.

October 14: After waiting 24 years for my first NHL game, I only needed wait 24 hours for my second, when the Oilers faced a new geographic rival, the Vancouver Canucks. The emotions and pageantry of opening night had worn off to some extent, but dammit even the Canucks were an NHL team and it was never too early to start laying the beat on them. In a wide-open, sloppy affair the Canucks took a 4-3 lead into the late stages, but this time the Oilers' "other" 18-year-old rookie, the ballyhooed Wayne Gretzky, emerged as the hero, scoring on a backhand from the edge of the crease with the goalie pulled to knot the count at 4-4. It was Gretzky's own first NHL goal, one day later but seven days younger than Messier. The official time of the goal was one of those spooky coincidences of foreshadowing: 18:51.

October 15: Flash forward 10 years and a day, to October 15, 1989, nineteen years ago today. In an impossibly-short period Gretzky had overtaken the mountainous career scoring totals that had taken the fabulous Gordie Howe 26 seasons to compile. As karma had it, the Great One – now a member of the Los Angeles Kings – was scheduled to visit his old stomping grounds early in the new season, just as he was poised to shatter Howe’s mark. Mister Hockey himself was in the building to witness history.

In the first period Gretzky tied the record with an unremarkable second assist on a powerplay goal, but he remained stuck on 1850 for the rest of the game. As time wound down with the Oilers leading by one, the loyalties of this fan never felt so divided. I wanted the Oilers to win, as always, but dammit, I wanted to see that of all records. I had personally witnessed close to a thousand of those points; I wanted to see the big one.

It unfolded like déjà vu, with Gretzky emerging as the Ultimate Hero, scoring on a backhand from the edge of the crease with goalie pulled to knot the count at 4-4. Many/most in the crowd rose from our seats in the manner of champagne corks, putting the event in its proper perspective as an Historic Moment ahead of the outcome of an early regular season game. It was only fitting that it truly be a Big Goal.

The game was stopped right there on the knife edge, tied in the last minute of the third period. A red carpet unrolled at centre ice for an official ceremony which included Mister Hockey himself. Representing the Oilers was their captain, Mark Messier, a great player in his own right who would go on to win the Hart Trophy and the Stanley Cup that eventful season. But nobody in the building would have guessed that the centre ice ceremony involved what would become the top Three scorers in NHL history. The durable Messier ultimately eased past Howe in the final year of his own colossal 25-year career, and to this day is the only NHLer within 1000 points of Wayne Gretzky.

Remarkable to think that both scored their first NHL goal on consecutive nights in my first two live NHL games. That each was the biggest goal of the respective games was the cherry on top … those goals meant a lot at the time, and they still do today. The Impossible Dream was off to an amazing start.