Why Jeff Deslauriers Will Play in the NHL

Share All sharing options for: Why Jeff Deslauriers Will Play in the NHL 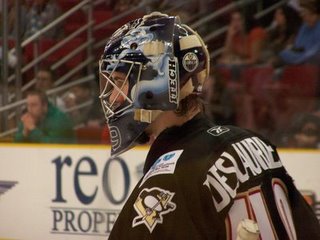 Most Oilers fans have a decent idea of who Jeff Deslauriers is. Drafted early in the second round of 2002 (as Jeff Drouin-Deslauriers), he was widely considered to be the best North American goaltender available. Redline Report placed him second overall amongst goaltenders (behind only Kari Lehtonen), and said this about him:

"[T]he biggest surprise of the top-enders, is as big as an octopus and takes up virtually the entire net with his 6-4 frame. In addition, he moves extremely well for a huge man. He has great intangibles with very positive body language and an alert attitude that gives teammates confidence. His rapid rise from nowhere this year gives the impression that he's got a huge upside if he can continue to make the same type of quantum leap from season-to-season."

Deslauriers has had a bumpy journey since being drafted. Read more...