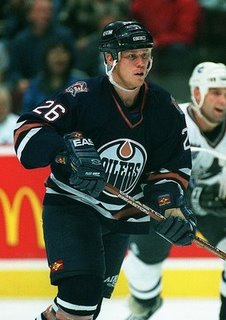 The Anaheim Ducks are now in a bit of a bind. James Mirtle has the full story, but here are the highlights:

Outside of guys the Ducks almost certainly won’t move (Getzlaf, Perry, Kunitz, Pronger, Niedermayer), there are a couple of players who could be traded to make this room. They are as follows:

Now, the long-running feud between Kevin Lowe and Brian Burke could rear its ugly head here, but with Steve Tambellini the Oilers’ official general manager (and Burke’s old #3), I think it’s realistic that if both teams wanted to make a trade, it could happen. The Ducks need cap room, and the Oilers can spare some. Additionally, the Oilers have some cheaper options up front that could go the other way, and a need for a number three centre.

Either of Rob Niedermayer or Todd Marchant could be an upgrade on the third line, but Marchant has been playing centre the last few years, and has a higher contract to boot. He does have a no-trade clause, but after playing in Edmonton for so long, I doubt that he'd attempt to block a trade back to the Oilers.

Some numbers on Marchant:

Looking at those numbers, it's difficult not to wonder if Marchant just had a bad year, or if he's dropping off as a player. Either way, he's only under contract for one more season, so it isn't really a high-risk bet.

If I were Tambellini/Lowe, I'd see what Burke thought about one of Potulny/Reddox/Pouliot/Jacques or even Mathieu Roy for Marchant and a draft pick. I doubt very much that Burke would like it, but I also doubt that he has much in the way of options right now (see the Andy MacDonald trade last season).

From an Oilers perspective, this not only upgrades the team, but doesn't hurt the log-jam up front either, with the only cost being an extra 1.5-2M in salary (dependent on who was going the other way). Even if the Oilers don't get involved, it will be interesting to see how Burke gets out of this particular situation.