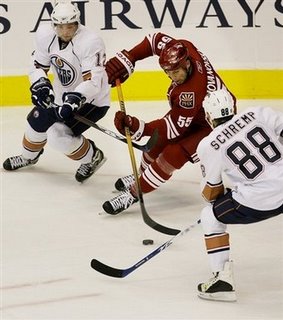 Bryanbryoil, well-known commenter at Hockey's Future, has thrown his hat into the rather crowded Oilers blogging ring. You'll find a link to his site on the blogroll, and in my personal opinion, he's a great addition to the already excellent list of Oilers' bloggers.

I don't generally add blogs that haven't been around awhile (because people get bored and stop posting), but BBO is a guy who has been around a long time and has been a consistent voice over at HFBoards. He takes some flack for his unabashed support of Rob Schremp, but I really don't think it's a bad thing that he's passionate about players he believes in. I don't always, or even generally, share his opinions about Oilers prospects, but I certainly respect the time and energy he devotes to following the Springfield Falcons.

Welcome to the 'sphere, BBO. I know I'll be reading.