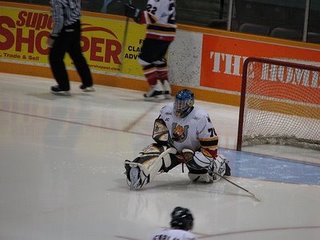 Andrew Perugini is a player I’ve talked about previously – he will be attending the Edmonton Oilers training camp this fall, and he has a realistic shot at getting signed as an undrafted free agent.

Perugini was born in 1988 and has been passed over three times in the NHL Entry Draft, although he’s been favourably mentioned by NHL Central Scouting and in connection with the Detroit Red Wings. He’s a smallish goalie (5’11", 163lbs) but he’s had some success over the years in the OHL. Read more...