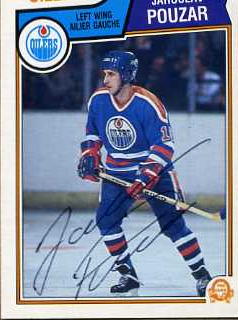 This is Jaroslav Pouzar. (Always wanted to write that, LT!) He won three Stanley Cups with the Oilers in 1984, '85 and '87, and his absence in 1986 was a little-credited factor in the Oilers upset loss to the hated Flames. Pouzar was at his best in the biggest games, and he proved it by becoming just the second man in history to win both a World Championship and a Stanley Cup (nowadays this is common, but only Canada's Sid Smith preceded him). Pouzar was the first and remains on a short list of elite players who have won both titles on multiple occasions.

Ugly helmet aside, he was an absolute beauty of a hockey player. He was a big scorer (33 goals in 75 senior international games) for the great Czechoslovak squad that knocked the Soviets off their eternal perch as world champions for a couple of years (1976 and '77) and which played a sublime Team Canada squad very tough in the inaugural Canada Cup. He was a star of the Lake Placid Olympics, where in 6 GP he posted 8-5-13. By the time he made it to Edmonton as an over-30, his hands had mostly deserted him, but his head was still intact and the rest of his game still very, very effective.

"Pouz" wasn't just tough, he was Lee Fogolin-tough. He may have been the proverbial fire hydrant on Wayne Gretzky's left side, but that was never more true than when somebody took a run at him. He would brace, they would bounce.

The man was, as we said (admiringly) in the day, a Tank. He was great at creating space; moreover, he seemed to hate all the same opponents I did. I remember listening to a Boxing Day game from Calgary one year (probably 1983) where Badger Bob Johnson deployed Doug Risebrough to get in Gretzky's face, hacking, beaking and generally frustrating the Great One. The first period ended scoreless, and for a radio listener full of wine and turkey I was about as pissed off as one could be. So here is an approximate recreation of Rod Phillip's play-by-play to start the second:

And now Jaroslav Pouzar has been moved up to the line with Gretzky and Kurri. This could get interesting. The puck gets shot into the Oiler end, OH! AND POUZAR JUST CRUSHES RISEBROUGH!! oh, he just demolished Risebrough, he's still down, and here's the puck into the centre zone, Gretzky and Kurri, two on one! Gretzky ... to Kurri ... HE SCORES!!!"

Took something like 21 or 26 seconds, and the Oilers were off and running to a 6-3 win. Pouzar never got a point, or a mention in the game story the next day, but I'll never forget it. I hated Risebrough, both as a Hab and a Flame.

Pouzar has an odd line in his stats: in the 1983 playoffs he played one game and scored 2 goals. They came in Chicago Stadium in the (first) Campbell Bowl-clinching game, as Pouzar replaced an injured Mark Messier in the line-up, the Oilers only significant injury of those playoffs. Messier came back to play hurt, and ineffectively, in the sweep at the hands of the Islanders, while Pouzar was left chomping at the bit in the pressbox while the set line-up got beaten up by the more-experienced Islanders. Not saying he should have replaced Messier, but I then, now, and will forever consider it a mistake by Glen Sather to not get him in there somewhere.

The next year Pouzar was in the line-up from the get-go, mostly on an extremely effective and irritating line with Ken Linseman and Dave Lumley. (Opponents' Rule #1: Keep your head up. Rule #2: Don't turn your back. Rule #3: Then worry about the puck) Pouz just hammered Trottier early in G1 as Mr. DeBakey mentioned in the comments section of the last post. More importantly, he absolutely smoked Billy Smith, midway in the second period of Game 3, within a couple of minutes of the famous Mark Messier goal that supposedly turned the series. It was at my end of the ice, Smith had gone out to tee up a puck behind the net, Pouzar got bumped on his way in, didn't avoid the contact and just clobbered Battlin' Billy with a wicked dart.

Interesting to note that the Oilers scored 4 goals (including Messier's) in the ~150 minutes before that hit, and 17 goals in the 150 minutes that followed. How much of that was The Goal and how much was The Hit remains an open question, but today one is celebrated and the other largely forgotten, and that doesn't seem quite right to me. Pouzar never did get the credit he was due in my view; the Oilers won 15 of 16 playoff series during his time here, and as mentioned he was pressboxed for the one they lost.

Pouzar was a man of few words, and those in a broken English which had an endearing way of getting straight to the point, usually with a twinkle in his eye. During one celebrated incident he got stitched up between shifts without bothering with a local anaesthetic, rationalizing: "Me married. No need good looks!" Local legend had it the quiet man spoke up in The Room during those 1984 Finals in what may have been his only dressing room speech during his time here. I don't suppose the message was much more than Carpe Diem, but it apparently had its effect.

That Oilers-Islanders rivalry was a great one, and Pouzar was one of the guys that turned the tide. I still remember the time I was sitting behind the Islanders net, the evil Denis Potvin made an outlet pass just as Pouzar came in and cashed his check with a particularly ferocious crunch. The camera and most eyes had turned up ice to follow the puck, but those in my end zone watched Potvin collect himself gingerly and glide over to the bench, doubled over in pain and gasping for wind. As this delicious scenario unfolded a leatherlung behind me let him have it with an unforgettable shot: "NOW YOU KNOW HOW YOUR WIFE FELT, POTVIN!!"

You had to be there, but if you were, it was damn close to perfect.