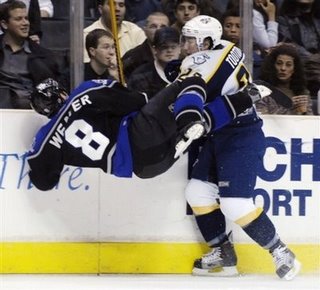 I'm adding a couple of sites to the blog-roll, and I thought it would be worthwhile to highlight why:

He Score, He Shoot! is an amusing little site that includes coverage of both the Edmonton Oilers and the Toronto Maple Leafs. Given what the Leafs roster looks like going forward, I expect their coverage next season to be about 50% Edmonton Oilers / 50% Vesa Toskala suicide-watch. But that's just me.

Pierre Lebrun now blogs for his new overlords, the hockey-loving folk over at The Score Rogers Sportsnet ESPN. He's one of the most connected journalists in the game, and is best known as being the voice of reason on the otherwise Kypreos/Watters/Eklund-influenced Sportsnet broadcast.

Since I've only got two paragraphs written, let's play a game for anyone reading this. Chime in the comments section about what position you played (if you played hockey) and an NHL player with a comparable playing style. This isn't quite a blatant rip-off of Covered in Oil's survey, where the question was a markedly different "If you were a professional hockey player that played for the Oilers at some point, past or present, who would you be?"

For me, I've switched back and forth between right wing and defense. I'm a left-handed shot, with good positioning and major size, speed and offensive ability issues. Think Mike Weaver, but without the talent. Oh yes, that Mike Weaver, except I would have clearly lost that fight.

Update: I've made a long overdue change to the format, by request, to make it easier to read on cell phone browsers. I think the new format is cleaner and crisper, but would appreciate any feedback you readers may have.