I Can Agree On The Problem, But I’m Not Crazy About The Solution

Share All sharing options for: I Can Agree On The Problem, But I’m Not Crazy About The Solution 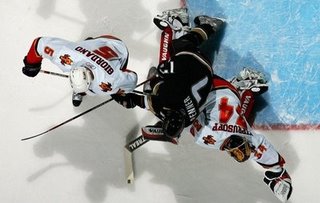 A couple of days ago, I wrote about what I felt was the most glaring hole in the Oilers’ lineup- the third line centre position. I suggested Bryan Smolinski as a possible solution, although a trade for a similar veteran player could fill the hole as effectively.

Craig MacTavish, however, seems to have discovered a different plug. A big-bodied plug with a nice face-off presence, questionable defensive zone awareness, and less than stellar skating. That’s right, according to Pierre Lebrun of ESPN (hat-tip to OilFaninCowtown on HFBoards), Craig MacTavish is strongly considering Dustin Penner as his third line centre. Read more...