A Guy You'll Hear From Next Year

Share All sharing options for: A Guy You'll Hear From Next Year 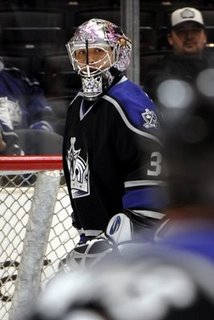 The 2004 NHL Entry Draft has had some interesting story lines. For the first time ever, Russian players were selected 1–2, with Alexander Ovechkin and Evgeni Malkin going at the top of the draft. Phoenix made a big reach and took Blake Wheeler (who has since signed in Boston) 5th overall. There were a couple of Oilers selected in that first round too, with Devan Dubnyk going at 14, and Rob Schremp at 25. Ladislav Smid had already been selected, 9th overall, by Anaheim.

Looking a little further down the draft, at 238th overall, Tokyo-born Yutaka Fukufuji was selected by the Los Angeles Kings. He was only the second Japanese-born player ever drafted, and on January 13, 2007 he became the first Japanese player to appear in an NHL game. He is currently with the Reading Royals of the ECHL.