Share All sharing options for: "Forever A Flawed Gem" 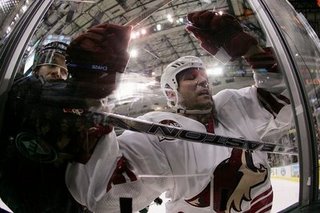 That line comes out of the 2008-09 McKeen’s Hockey Yearbook. It’s the last line in a description of Ed Jovanovski, the ex-Canucks defenseman. It's also a remarkably succinct summary that could be applied to whole groups of players across the National Hockey League. Ilya Kovalchuk is perhaps the best player in that group, a pure-offense player of incredible quality, but not exactly a well-rounded performer.

I remember watching a lot of Canucks games when Ed Jovanovski was still in Vancouver. This was Burke's team, a cast which experienced change but was anchored around the core players: Bertuzzi-Morrison-Naslund up front, Jovanovski and Ohlund on the back end, and Dan Cloutier in net. The Sedins were there too, but were still too young to have a major impact.

My dad (a Canucks fan) and I had a recurring discussion about Jovanovski vs. Ohlund - which was the better player, if it came down to making a choice between the two, which would you keep, that sort of thing. We both agreed that Ohlund was by far the better defenseman, and I think history has born that out. Jovanovski had some fairly elite-level offensive seasons (2000-2003) in a Canucks uniform, and was beloved for his physical game. If I remember correctly, he even recieved some Norris Trophy consideration.

Jovanovski looked lots better when paired with Marek Malik, a defense-first blue-liner who combined size and intelligence with a nearly non-existent hitting game and slow foot speed. Still, positionally he was (and by the numbers, remains) a brilliant player, and he compensated for Jovanovski's inability to make smart decisions anywhere on the wrong side of centre ice.

The thing about Jovanovski is that the fans loved him. He threw big hits, he fought, and most importantly, he put up nice totals in offensive categories. I'd wager that if Canucks fans had been polled during his heyday on the question my dad and I considered (vs. Ohlund), the overwhelming majority would say that Jovanovski was the better player, the player worth keeping. That sounds like a knock on Canucks fans, but it really isn't - I'd be willing to bet that if the Oilers had those two players today at that juncture of their careers, the results would be the same among the Edmonton fanbase.

The 2002-03 playoffs really show what Jovanovski is in a nutshell. That stats line doesn't always accurately indicate player ability, or performance, but in this case it does:

That's an incredible goal-scoring pace, and I remember the play-by-play guy on CBC talking about what a great player Jovanovski had been during the playoffs. Still, my memory wasn't those goals, but the number of times Cloutier would angrily shovel the puck out of his net, and Jovanovski would dejectedly come skating back into his own zone from the other side of the blueline (Cloutier had ugly numbers that year, but he really wasn't that bad - it was the style of game that team played, and the sheer volume of quality chances they surrendered). Naslund was much the same.

Even thinking back to 2003-04, when the Canucks and Flames had an excellent 7-game opening series, the memory that stands out is Ed Jovanovski in front of his own net, with minutes left in the third period of game seven, and his team down by one goal, cross-checking a Flames forward in the back of the head. He did it once, and I shook my head. He did it a second time, and I looked at the motionless referee. The third time, the hand shot up, the whistle blew, and Jovanovski went to the box. Either Matt Cooke or Trent Klatt scored short-handed (Note: It was actually 5-on-4 for Vancouver, with Auld pulled, because Andrew Ference had earlier taken a penalty) to tie the game (I can't recall which, both had big goals that series) and Martin Gelinas finished it off in early overtime (IIRC) before Jovanovski's penalty expired.

The point is, for all of the flash and ability of aplayer like Jovanovski, he isn't the kind of guy a contending team can have too many of. One-dimensional players (whether for offense or defense) can be of great value in a given role, but too many of one kind spells disaster. The year Tampa Bay won their Stanley Cup, they had Vincent Lecavalier, but they also had Brad Richards and Tim Taylor behind him, and those guys played important roles too, offsetting Lecavalier's deficiencies.

I also don't believe that GM's hould hand out big contracts to one-dimensional players. Guys like Lecavalier and Kovalchuk cost the same as players like Jarome Iginla and Henrik Zetterberg, but there really isn't any doubt who I would rather have on the ice as a coach, or which player brings more to a team. It's the reason that players like Shawn Horcoff and Fernando Pisani are so valuable - they're complete players, albeit at different levels. Player payment seems based, almost exclusively, on offensive ability. Doesn't it make sense to go after the guy who can play on both sides of the red-line if the cost is the same as the one-trick pony?