Share All sharing options for: The Cap Isn't the Problem; A Lack of Restraint is the Problem 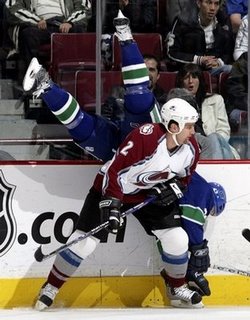 This rather amusing image is of former Colorado defenseman Ken Klee. Klee must have been ecstatic the other day to learn that he (along with veteran forward Brad Larsen and prospect Chad Painchaud) are considered as having less value than nothing. They are the "bag of pucks" in the New NHL, given that they have all been traded to the Anaheim Ducks in exchange for a player who nobody wanted when they could take him at no cost. It's a somewhat ridiculous trade, and the kind that only makes sense when the monetary ramifications are taken into consideration.

On this ludicrous situation (via James Mirtle), is this beauty of an article by Damien Cox. Here are some of Cox's statements:

"For a while now, Brian Burke has been dancing with the devil, otherwise known as the NHL's salary cap system.

Two years ago, Burke worked it beautifully and captured a Stanley Cup. Last year, his machinations went slightly askew and it cost his Anaheim Ducks the services of a very good veteran player, centre Andy McDonald.

This fall, the cap has pushed another quality veteran off the Anaheim roster in defenceman Mathieu Schneider, peddled to Atlanta yesterday in a deal that, as a pure hockey trade, was about as one-sided as you can get."

and a little further down:

"So without the cap, the Ducks would still have McDonald and Schneider, with Ryan available to play high in their lineup.

In a cap world, however, McDonald and Schneider are gone, and it may be impossible for the club to use Ryan in the short-term."

Yes, that's right - the cap is the problem. Not the signing of Todd Bertuzzi to an overpaying contract (later bought out, at a further cap hit) that helped cause Burke's inability to keep, not only the players above, but also Dustin Penner, snagged by Kevin Lowe via an RFA offer sheet. Not the signing of Jonas Hiller to a 1.3M/yr contract that forced Burke to send out Ilya Bryzgalov for nothing over wiavers. Not Todd Marchant's ridiculous deal which Anaheim had to take off the Columbus Blue Jacket's hands to get the even-more ridiculous contract granted to Sergei Fedorov off their books.

Here's the thing: thirty NHL teams need to deal with the salary cap. It's a level playing field, and it is a necessity to keep people like Glen Sather from buying up every player on the free agent market every single season. The fact of the matter is that this system is what's in place, and managers need to deal with it. A manager blaming the salary cap for his team's woes is like a debtor blaming the credit card company for his bankruptcy. Yes, if the system wasn't in place, they wouldn't have to deal with the unpleasant consequences of their actions. On the other hand, if they hadn't made poor decisions in the first place, they wouldn't have to deal with the consequences of their actions either.

It isn't the fault of the salary cap that Andy McDonald, Dustin Penner, Ilya Bryzgalov, and Mathieu Schneider no longer play for the Anaheim Ducks. It is the fault of a general manager who failed to understand the system he was operating under, a man who continued spending money he didn't have to spend. NHL GM's can spend money they don't have, but only too a point. Once that point is reached, they do things like putting quality NHL'ers on waivers, or trading draft picks to sweeten the pot for teams that don't want those salaries either.