Bruces in the news

Share All sharing options for: Bruces in the news 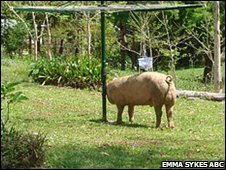 I got a warm welcome to the Oilogosphere from the fellows over at Covered in Oil, albeit with a rather questionable image of some guy supposedly named Bruce which seemed to play on my name's entirely unearned reputation for effemininity (sic?). Check it out here.

I responded with a list of the powerful (and superpowerful) Bruces in Hollywood, while Doogie2K helpfully chipped in with a reference to the baddest of all my ancestral Scots, Robert the Bruce. Now today comes news of the boarish behaviour of the latest candidate for the Brotherhood of Bad-Ass Bruces.
Large pushy pig traps Australian

courtesy BBC.co.uk
A woman on the north coast of New South Wales in Australia is being held hostage in her own home by a large pig, Australian media report.
Uki woman Caroline Hayes, 63, says the pig is as big as "a Shetland pony" and that she cannot get out of her house because of its aggressive behaviour.
"It started knocking on my door at 4 am, head-butting the door, [after] some food," she told ABC television.
When she opened the door, she said, the pig pushed her back inside the house.
The offending animal, whom neighbours have named Bruce, also pulled a king-sized mattress out of her garage and ripped it up.
Ms Hayes, who describes herself as an animal-loving vegetarian, admits she and some of her neighbours had begun feeding Bruce.
Rangers from Murwillumbah Council tried to catch the large animal but the cage was too small. Animal ranger Len Hing, who visited the scene, explained that Bruce's large size makes him difficult to control when hungry.
"He is a bald pig [weighing] about 80 kilos [176lb]," he said.
"I wouldn't like to see the pig go as a pet anywhere because he could become a potentially dangerous animal."
Rangers say the pig will be captured and taken to a piggery.