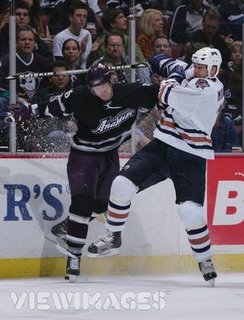 TSN is reportng that the New Jersey Devils have placed defenseman Vitaly(i?) Vishnevski(y?) on waivers. Vishnevski was the 5th overall pick by Anaheim in 1998, and played for Atlanta and Nashville in 2006-07. Devils' GM Lou Lamoriello signed Vishenvski to a 3-year, 5.4-million dollar contract last summer, and like so many of his contracts post-lockout, it's turned into a bit of a burden. Here are Vishnevski's 5-on-5 numbers for the last two seasons, from Behind The Net:

Vishnevski played third pairing competition in Nashville and New Jersey, and second-pairing in Atlanta. Only Niklas Havelid had a worse GAON/60 among Thrashers players, both forwards and defense. It's difficult to describe how bad Vishnevski's season was for the Devils - Vic Ferrari's Time On Ice has him as being on the ice for 61 more offensive zone than defensive zone draws, and if we accept the Behind the Net competition data as reasonably accurate, it's rather amazing that Vishnevski finished an entire goal in the red over 60 minutes.

Someone will probably take a risk on Vishnevski, who was among the Devils leaders in both hits and blocked shots, but I wouldn't want it to be the Oilers. Betting 3.6 million dollars on a player who is likely a third-pairing defender just doesn't make sense.

Update: New Jersey reporter Tom Gulitti has reported on his blog Fire & Ice that the Devils likely intend to buy out the remainder of Vishnevski's contract. If it weren't for the recent signing of Jason Strudwick I'd suggest the Oilers should take a run at him. He might be a nice low-risk, high-reward pickup for a team who needs a third-pairing/seventh defenseman. Otherwise, I imagine a KHL team might be interested in bringing him back to Europe.

Update II: The New York Post reports that the Devils may be clearing cap room to bring in a big-name player, and suggests a puck-moving defenseman, such as Mathieu Schneider or Jay Bouwmeester. It also reports that Vishnevski will likely end up in the KHL.