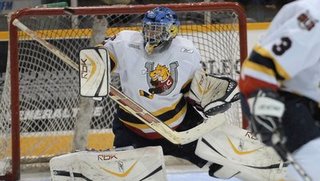 Courtesy of Dave Borody of The Sarnia Observer comes this very interesting news:

Obviously Perugini is the key. He has been invited to the Edmonton Oilers camp as a free agent. He has said he will only accept an American Hockey League contract and not go to the East Coast League.

Andrew Perugini just turned 20 last month and has been an OHL starter for the past two seasons. Here are what his numbers look like over his OHL career:

This is a guy who's posted great numbers with good teams (Barrie in 06-07) and middling teams (Sarnia in 07-08) and frankly looks, at least on the surface, as a guy with better upside than Bryan Pitton. He says he won't accept an ECHL deal, but I'd say that he has the resume to beat out Pitton and Glenn Fisher for the right to backup Devan Dubnyk in Springfield.

I hope he performs, and I hope he's signed, because he could be a legitimate prospect.