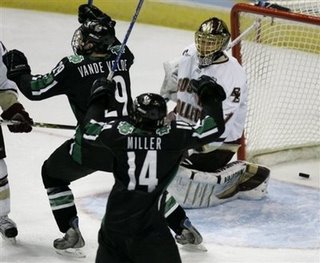 I'm not sure that I made it clear enough in my earlier posts, but I'm very big on Chris Vande Velde as a prospect. Right now he's a bit of a power forward, although Oilers development coach Bob Mancini says that he could still use more grit and better awareness in the offensive zone. Vande Velde's coach, Dave Hakstol, calls him an "intelligent" player, and he's consistently described as difficult to knock off the puck.

After looking up statistics for a piece on Jeff Petry (which will be on OilersNation later today), I decided I'd go to the University of North Dakota website and see what I could find on Vande Velde. There were a few things worth noting:

1. Vande Velde took 366 faceoffs for the Fighting Sioux last year, a number that lead the team. He had a 55.0% success rate, and it isn't unreasonable to suspect that once he adapts to professional hockey he'll be a good faceoff man.

3. Vande Velde's +10 looks nice until we consider that his regular linemates, Ryan Duncan (+22) and T.J. Oshie (+15) were both well clear of him. It's far from definitive, but I very much doubt that Vande Velde was the guy driving the results on the first line, given that both Duncan and Oshie are extremely effective offensive players.

4. Another red flag: Vande Velde took only 87 shots, but lead the team in shooting percentage at 17.2%. He may just be an extremely efficient scorer, but after scoring only 3 goals the entire season before, the possibility exists that there isn't much sustain to his goal scoring.

All things considered, Vande Velde's probably in line for a bit of a drop in production, unless he can take another step forward this off-season. I don't think it's a big deal, though, because I very much doubt that Vande Velde will be an offensive player at the NHL level. He's a big (6'2", 204lbs) strong centre who wins both faceoffs and puck battles - he sounds like he'll fit in nicely on some team's third line some day.