Shooting: What and Where

Share All sharing options for: Shooting: What and Where 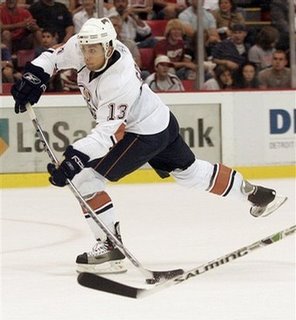 As anyone who reads my writing knows, I'm an avid fan of the work done by Gabriel Desjardins at Behind the Net. One of the many things he does to improve game analysis is provide individual shooting data at even strength, taken from the individual game play-by-play logs at NHL.com.

Cogliano pretty evenly uses snap shots and wrist shots (he only fied two slap shots last season). He leads the Oilers in shortest average distance from the net (23.5 ft) when he shoots, which goes some way toward explaining his abnormally high shooting percentage. He also hits the net three times as often as he misses it, which is a very good total and indicative of some pretty precise marksmanship.

Gagner is interesting in his shot selection; he tried snap shots and slap shots 31 times each, to go along with 43 wrist shots. Unlike Cogliano, his ratio of hits:misses isn't so good (90 hits, 42 misses).

Penner led the Oilers in even-strength shots, both on and off goal (139 shots, 63 misses). He's also near the bottom of the pile in shooting percentage (only Stoll and Torres last year had lower numbers among forwards), something that suggests he'll be more effective this season.

Excluding snap shots (where he hit the net three times on three tries), Matt Greene was more likely to hit the endboards than the net, recording 23 shots on and 25 missed.

The Oilers defender most likely to put the puck on net, Smid recorded 0 even-strength goals last season. Given his uncanny (for a defenseman) accuracy (41 shots on net, 15 misses), I'd say he's due for a bump in goal-scoring next season.

Of Oilers regulars, only Gilbert and Joni Pitkanen were as varied in their shot choice. Gilbert fired 31 wrist sots and 38 slap shots, and the volume of wrist shots probably had something to do with his excellent shooting percentage last season.