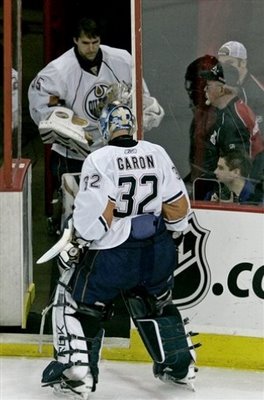 In 2007-08, the Edmonton Oilers employed a two-goaltender system for the third time in the MacTavish/Lowe era, and for the second time, it was a decision forced on the team by a starter's regression (Roloson, Salo in 2003-04) and a better than expected performance by the back-up (Garon, Conklin in 2003-04). Thus, with the exception of the 2005-06 goaltending train wreck, the Edmonton Oilers have never entered the NHL season under Lowe with the intention of employing a two-goaltender tandem.

It looks like the Oilers will employ a tandem (or possibly, three-headed monster) in net this coming season, with Mathieu Garon not yet established as an NHL starter, Dwayne Roloson's contract close to unmoveable, and a desire to test Jeff Deslauriers at the NHL level. It isn't a great-looking lineup, and there's questions to be answered by each, but as a group they should provide average to better-than-aerage NHL goaltending (of course, the last time I said that was before 2005-06, so take it for what it's worth).

Since I referenced the Conkkanen tandem earlier, Craig MacTavish alternated between Conklin and Markkanen as backups to Dwayne Roloson during the SCF run. When Roloson went down in game 1 against Carolina, Ty Conklin was the guy on the bench, and we all remember the tragic miscommunication between him and Jason Smith, which reulted in Rod Brind'Amour scoring the game winner. After the game, Don Cherry was harshly critical of MacTavish for not picking one backup and using him, with the idea that the better goaltender should always be the back up. Ron McLean countered that there wasn't much of a difference in performance between MacTavish's options, an idea that Cherry refused to consider.

I remember largely agreeing with Cherry at the time; clearly, there must have been some difference in quality between Markkanen and Conklin. Now, I'm not so sure. At the time, I was also skeptical about tandem systems; Minnesota, for example, has never had a goaltender reach the 60 game mark, always employing a rotation. My belief was that an NHL team should have one player who got 75%+ of the starts, with a cheap backup who could step in when needed. The majority of NHL GM's folow this pattern; in 2007-08, 14 goaltenders played more than the 58 games that Niklas Backstrom posted. In other cases (Anaheim, Washington, Columbus, Colorado, Nashville, Atlanta, Boston, Chicago, Edmonton, Los Angeles, Pittsburgh, Tampa Bay) either injuries of unexpected variance in performance meant that the projected starter played less than sixty games. That leaves four teams who went into the season with true goaltending partnerships:

There was an interesting post over at Mc79Hockey, largely about goaltenders. One paragraph stands out, one where Ken Holland was quoted:

Now, Tyler Dellow pretty much proves what Holland is arguing in his post, so I'm not going to spend a lot of time re-treading his arguments. Suffice to say, it's easy to sign a relatively cheap 1A goaltender (such as Chris Osgood) to a mid-length contract, and it's probably not going to result in a big drop off in performance. Lowe managed this last year when he signed Mathieu Garon from Los Angeles.

So if we accept Holland's premise (aside from the top-end goalies, it isn't worthwhile to spend a ton of money on a puck-stopper), the majority of teams should be signing their starting goaltenders for somewhere between 1.5 and 3 million dollars per season. The other point is that these goaltenders likely have issues; inconsistency, durability, whatever. Tyler alluded to one problem with these guys: "I think that the line between the tenth best goalie in the NHL and the twenty fifth best goalie in the NHL is a pretty hazy one and that there’s an awful lot of movement around that line from year to year."

So, if a team is playing a fairly cheap 1A goalie as their starter, why not pick up another goaltender of a similar type and run with him, rather than grabbing a lousy back-up? And, if a team has two options that are fairly close in terms of ability, and given that players levels of ability tend to fluctuate not only season-to-season, but week-to-week, why not just play the hot hand and keep the games played close? This is something that Minnesota (a very well-run organization, IMO) has done since joining the league, and it has a few non-trivial benefits:

1) Insurance in case of injury/slumps/etc.
2) Keeps salaries low (because the goaltender doesn't have an opportunity to put up nice numbers over a whole bunch of games)
3) Keeps both goaltenders fresh and competitive

Looking at the four examples of tandems from last season, we can see how beneficial it was to run with a pair of competent goalies. In Detroit, both Hasek and Osgood slumped at different points during the season, and when Hasek looked shaky in the playoffs, Babcock was able to turn to Osgood with a minimum of drama/lost confidence. In Minnesota, the team was able to develop a talented youngster with a comfortable safety net, as was Montreal. Gainey's trade of Huet at the deadline was a regrettable decision, and if he'd kept Huet for the playoff run, the team would have had a decent option to turn to when Carey Price started leaking goals against. The only case where the pairing was a failure was in Ottawa, and would the team have been any better going with only one of the two goalies? Not likely.

Short term, I'd like to see the Oilers keep Roloson/Garon, at least unless Jeff Deslauriers can do a convincing job in net, which seems unlikely. Long term, the Oilers should sign Garon if they can do it at a reasonable salary (say 6M/2 yrs) and then either re-sign Roloson short-term (if he rebounds) or pick up a goaltender from the same talent level as Garon.

Unfortunately, Lowe/MacTavish seem to prefer a clear-cut starter, and judging from the Canucks decisions over the years, it would seem that Steve Tambellini is of the same mindset.