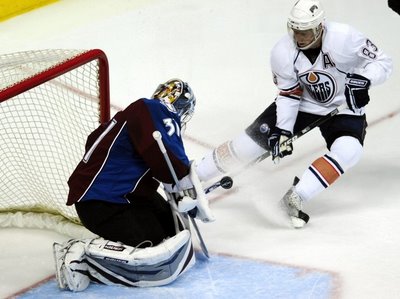 It's been a while since I've looked at the Oilers from a salary perspective. Outperforming contracts is very important in a salary cap era; since all the teams are playing on a relatively even surface, logically, the team that gets the most value for its money will be in the best position.

I've split the team into who I expect to outperform, give fair value for, and underperform the dollars they'll be paid this year. Please note that I'm not judging the contract in its entirety, just the dollars vs. expected performance for 2008-09.

*Ales Hemsky - 4.1M - The best part about this contract is that Hemsk'y locked in for the next four seasons.
*Erik Cole - 4M - An unrestricted free agent next season, Cole is in line for a decent-sized boost in pay. For now, he's getting less money to be a better player than Dustin Penner.
*Shawn Horcoff - 3.6M - He may not make this list next year with a bump up to 5.5M/season, but 3.6M for a top-30 centre is money well spent.
*Sam Gagner - 1.625M - Gagner's offensive production this season will, in my opinion, be worth more than his salary, particularly if he winds up on the first powerplay unit.
*Denis Grebeshkov - 1.5M - I think Grebeshkov eventually ends up back in the KHL, but a nice season this year could elevate his value to such a level that their will be too much demand for the KHL to compete. At 1.5M, he's going to outperform his salary this season.
*Mathieu Garon - 1.1M - Even with minor regression, he'll easily earn his money. His contract will at least double and possibly triple in 2009-10.
*Kyle Brodiak - 498K - Even if he doesn't rise above the 4th line, Brodziak's a good bet to cover his contract. Right now, I think he's the odds on favourite to play third line centre. Has underrated offensive ability.

Fair Compensation
*Lubomir Visnovsky - 5.6M - A very nice puckmoving defenseman, he covers his contract if he returns to form. A bad season would see him not being worth his contract. Long-term (he's signed for the next 5 seasons at the same rate), he probably ends up on the bottom list.
*Steve Staios - 2.7M - Some players bring enough to the table to be worth much more than their counting stats would indicate. Staios is an absolute warrior and a stabilizing influence on the back end.
*Fernando Pisani - 2.5M - This contract could be considered an over-payment, but Pisani is a crucial player on the Oilers because of his versatility and his elite checking skills. He fits well in any situation, with any linemates, against any competition. A coach's dream.
*Robert Nilsson - 2M - I really liked this signing, but Nilsson probably won't overperform this season. 2M is a fair price if he can pick up where he left off in 2007-08, and a steal down the line.
*Andrew Cogliano - 1.13M - Unlike Gagner, Coglaino doesn't have much chance of repeating his rookie year success as a sophmore. He's a good young player with blinding speed and will probably play a key role on the penalty kill, but I think his offense will drop, as will his even strength playing time.
*Ladislav Smid - 915K - A third-pairing defender (to this point) making third-pairing money.
*Marc Pouliot - 825K - Pouliot could end up having one of the nicer contracts on the team if he can take and hold the third line job. Otherwise, he's paid fairly for a 4th line role.
*Rob Schremp - 780K - A question mark right now, but he doesn't have a big contract.
*Zach Stortini - 700K - If Stortini picks up where he left off, he could also turn into a steal. A very nice 4th liner who brings fighting to the table, I doubt he has a high enough ceiling to seriously outperform his contract, but he's a good bet to cover it.
*Jason Strudwick - 650K - Scott Ferguson with fighting.
*Theo Peckham - 600K - He'll play in the NHL at some point this season, and probably not do much.
*Liam Reddox - 508K - If he becomes a regular, he'll be doing enough that he's probably underpaid, but I'd be willing to bet he ends up as filler.

Underperformers
*Sheldon Souray - 5.4M - Too much money, and also for way too long. Souray's a nice player, but he isn't a complete defender.
*Dustin Penner - 4.25M - I imagine that he'll earn the money at some point over the course of his contract, but for 2008-09, Penner seems unlikely to earn his money.
*Tom Gilbert - 4M - A potential contract, plain and simple. Lord Bob did a nice job pointing out how unlikely Gilbert is to maintain his production next season. He'll likely be worth the money at some point over the contract's duration.
*Dwayne Roloson - 3.7M - Too much money for a backup in the Hasek age range.
*Ethan Moreau - 2M - If healthy, Moreau likely brings a lot to the table in a 4th line role. He likely isn't capable of the tough sledding at this point, and his current contract was a loyalty signing by Kevin Lowe. He makes his current salary for the next three seasons.
*Gilbert Brule - 1.25M - If Brule makes the team, he would need to take a big leap in performance to be worth his salary. As it is, he's basically a serviceable 4th liner.
*J-F Jacques - 700K - He isn't an NHL-calibre player to this point in his career, and he hasn't earned a one-way contract.
*Jeff Deslauriers - 625K - See Jacques.
*Mathieu Roy - 500K - It isn't a big deal, but it seems highly unlikely that Roy plays another game in Edmonton.

Overall, the Oilers are about 2 million under the salary cap, and will probably be fighting for a playoff spot until the end of the season. In other words, they're about average in how they manage their contracts.