It's A Small World

Share All sharing options for: It's A Small World 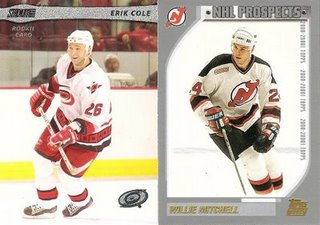 Erik Cole and Willie Mitchell were teammates for two seasons at Clarkson University. In 1997-98, Mitchell and Cole were co-winners of the ECAC Rookie of the Year award. Cole had 31 points in 34 games, while Mitchell managed 26 points in the same. In 1998-99, Mitchell was a first-team All-Star, and Cole led the ECAC in goals.

Cole never needed to change his game at the NHL level; he was always a goal scorer with good defensive habits, and he's the kind of player who is going to fit in very nicely in Edmonton (or indeed, anywhere else). He's a player that the Oilers have been lacking since sending Ryan Smyth to New York - a first-line winger who makes major contributions both on and off the score sheet.

Willie Mitchell is a player the Oilers could really use. Last year, he was thrown against the toughest opponents night in and night out, and he came out ahead. He is a physical player, and although he was a major offensive threat in college, he's adjusted his game to be one of the best shut-down guys in the NHL. He's the player the Oilers haven't had since Jason Smith got sent to Philadelphia; he's the guy Matt Greene wasn't going to become and the same type of player that Ladislav Smid will eventually turn into if the Oilers get really lucky.

They're going to see a lot of each other this year, more than they have since playing together all those years ago. In all likelihood, it's going to be a meeting of an unstoppable force and an immoveable object, because they're both quality players.

Since we're on the subject, there were two other NHL'ers on those Clarkson University teams: Chris Clark, now with Washington and a one-time Flame, and Kent Huskins, who has turned into a nice depth defender with Anaheim. The guy who coached those four was Mark Morris, a former college player and AHL journeyman; he's entering his third season as coach of Los Angeles' farm team in Manchester.

Morris was a phenomenally successful coach at Clarkson Universityy for a number of years, but began running into problems towards the end of his tenure. These culminated in a physical altercation with winger Zach Schwan. Harvard Crimson writer Jon Paul Morosi had this to say about the incident:

The incident was reported to the university, and, with the relationship between Morris and Clarkson administrators in a state of disrepair, he found little support there. Following a 10-day investigation, Morris was fired, shortly before that night’s Harvard-St. Lawrence and Brown-Clarkson games.

"He was taken advantage of," said Michigan State head coach Rick Comley, who at one point had agreed to testify on Morris’ behalf. "It was totally unnecessary, unneeded and unfair."

Adam Wodon did a detailed piece on Morris back in 2003, and describes Morris as "paranoid" with both the media and other coaches, and also characterizes him as taking game situations too personally. Morris spent a year in the OHL before Marc Crawford hired him as a conditioning coach with Vancouver. Eventually, he got a job as the head coach of the Manchester Monarchs - Los Angeles' AHL team.

Currently, he's 90-52-18 as an AHL coach, and looks like he has put the ugliness at Clarkson behind him; he may even be getting close to the NHL career that eluded him as a player.