I'll Never Make It As A Detective

Share All sharing options for: I'll Never Make It As A Detective

As those of you who have been reading this site since its inception know, I am forever making references to two hockey books: Future Greats and Heartbreaks, by Gare Joyce, and King of Russia, by Dave King with Eric Duhatschek, because I think both do an outstanding job highlighting parts of hockey that are both relevant and rarely accessible.

Aside from that, anyone who was reading this blog back in April will know that I'm always very interested when a hockey book makes a reference to a player but doesn't give his name. One of my first posts was about such a player, nicknamed "the Fish" by Dave King, a player I'm quite confident I correctly identified - Stanislav Chistov.

Gare Joyce makes a bunch of similar references in his book to players, often without ever identifying who they really are. One of these is found on page 195 of Future Greats and Heartbreaks, a player that Joyce did a sample quote sheet on for the Columbus organization:

Junior coach: "Hard on himself- harder than we are on him a lot of the time. Very up and down emotionally. He's a hyper kid a lot of the time. He's had a couple of setbacks and he doesn't get over them quickly. They stay with him longer than they would most other kids."
A teammate: "He's in the gym all the time. He wants to watch video [of games] all the time. He thinks the more time he spends on the game, the better he'll be.
A former billet: "We had him our first year away from home [when he left to play midget AAA]. He went home after a month or so. He said he was homesick and I think he was. I also think his father wasn't real happy with [the son's] playing situation. Anyway, he came back after a time. He wasn't a bad kid- there weren't issues with the rules of the house- but he wasn't the most socially adept player we've put up, and we've put up kids from very small towns."
A coach who worked with him in a tournament: "It was a bad situation for him. We just had other players and I knew them. I didn't know him that well. I knew he had physical talent, some great skill, but I wondered about his game judgement sometimes. Of course, he was younger, but still, compared to other playes his own age, I don't think he was reading the game as well as he should have been- trying to do to much sometimes. I think that's a question that's still hanging out there."
Another source: "His father seems to be an issue."

The unnamed player was described as being a player that the staff in Columbus was familiar with; further, Don Boyd says that he knew the father could be an issue, making it all but certain that the player was Blue Jackets property for some time. He would also likely be a top pick, someone the scouts prioritized early on as a target. 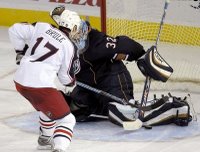 I was reminded of this part of the book as I did research on Gilbert Brule for the series Wanye and I have been doing on him - the article that triggered my memory was from NHL.com. Here's some of the similarities:

But Brule is a rare breed that combines toughness and talent, all packaged within a quiet, almost unobtrusive demeanor. Brule is almost shy, but engaging. He will answer every question with respect and courtesy.

He tends to speak only when spoken to and shies away from the spotlight, but he can send a verbal message when necessary.

Brule's last junior coach, Don Hay, is effusive in his praise of Brule. "He is such a competitive young man, he really wants the puck in critical times and that's not a skill every player wants," Hay said. "He wants to be the player that makes the difference."

What I've read on the various message boards (reliability of such information: questionable) indicated that Brule's dad was a possible obstacle in his playing career.

Further similarities are plain in a Randy Sportak piece from Noveber of 2004 (one we highlighted in Part 1 of the Brule series). Here are some choice quotes from Brule, and Don Hay, his junior coach:

Brule: "I don't want all that attention and pressure. I put enough pressure on myself already."

"I don't think bigger is better all the time. I'm not the biggest player out there but I can still take the puck off a guy."

It all seems to point to one thing: Gilbert Brule is the player that Joyce was referring to. A player who puts a ton of pressure on himself, is socially awkward, but has a high level of drive and a near-obsession with the game. It's gotta be Gilbert Brule.

Update: Two readers have called me to task respecting the quote from a former billet. Their reasoning is that Brule played AAA in Vancouver, while living at home. Although I've yet to see any firm confirmation of this, it does seem extremely plausible, and the idea that Joyce would confuse AAA with Tier II Junior A seems unlikely; thus making my deduction less likely than I originally thought.