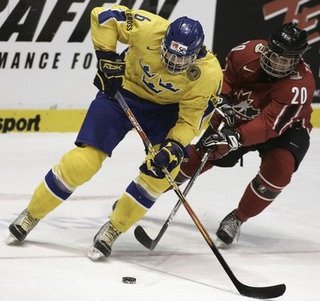 A couple of interesting players here. The Canadian player is John Tavares, while the Swedish player is Victor Hedman. One of these two will almost certainly be the first player selected in the 2009 NHL Entry Draft, with the current favourite right now likely Hedman.

A commonly accepted axiom is that to rebuild, a team needs to demolish, throwing every veteran, useful or not, off the bus and playing the young kids until they drop. It's the kind of thinking espoused by a guy like Dave Shoalts in Toronto, and although rather mindless, it has the virtue of being almost certain to succeed. Hockey's a cyclical game; teams are good, and then they're bad, and then they're good again.

Dean Lombardi has been practicing this strategy with ruthless efficiency in Los Angeles. It took him a while to decide to go that route; he was named G.M in April of 2006, and after selling off assets at the 2006-07 trade deadline, he went out and signed a bunch of second-tier veterans: Brad Stuart, Michal Handzus, Ladislav Nagy, Tom Preissing, etc. Now though, the Kings have a nice looking group of young forwards, a bunch of not-ready-for-primetime defenseman, and probably the most underrated goalie in the league in Jason Labarbera. All this, and they sit underneath the salary cap floor (incidentally, the more I think about the length of Lubomir Visnovsky's contract, the less thrilled I am with the move to acquire him).

The problem, of course, is that these kids eventually want to be paid. We saw it in Tampa Bay a few years back, where Jay Feaster decided to keep Lecavalier, St. Louis and Richards together for big money and use haywire and duct tape to fill out the rest of the roster. It didn't work out; Tampa Bay got a championship out of it, but there wasn't any sustain to the team.

Pittsburgh is in a similar boat now; they made the choice to allow supporting players like Ryan Malone and Marian Hossa walk this year, and if they aren't careful, they'll end up top-heavy and far too shallow to be legitimate contenders, even with Crosby.

The point I'm making with this is that there's an extremely limited window with the fire-sale team building method. Eventually (and it usually doesn't take any longer than the 3-year entry contract) all these top-ten picks want to get paid like their counting numbers say they should, and the team is either forced to abandon the players or to rob the temple to pay for them. Most NHL executives seem to subscribe to the notion that the marquee player is the most important part of the team, and end up looking like Jay Feaster.

The Oilers just went through a mini-rebuild; it's been two years thus far, and there's light at the end of the tunnel. They're likely a playoff team this year, and they still have lots of upside. Additionally, with the exception of Gagner, there aren't a lot of marquee names needing contracts soon; Robert Nilsson was a late-bloomer and he's lost some luster and was recently re-signed to a very reasonable contract, and even nice prospects like Andrew Cogliano and Ladislav Smid have glaring flaws that should keep them affordable.

Still, although the rebuild was probably unneccessary (overpay for Spacek, don't trade Pronger for anything less than a number one defenseman and a young forward), Kevin Lowe did a good job grabbing assets using a simple rule: acquire volume. The Oilogosphere often stresses the need to acquire quality over quantity, but when dealing with young players, it can be difficult to predict where they end up and quantity is a safer (maybe not better, but safer) bet than quality.

The thing is, rebuilds shouldn't be neccessary. Detroit is the obvious reference here; a team that's been the oldest or nearly the oldest in the league for the last decade, but has stayed on top (although how they'll handle Lidstrom's eventual retirement is anyone's guess). How? By making smart bets.

A long series of good choices is a difficult thing to do; many a successful general manager can't keep making them (Lou Lamoriello, post-lockout, is a good example). An important part is staying away from bad contracts - spending a bunch of money on one-dimensional players, second-tier goaltenders, etc. Another important part is putting kids in a position where they can succeed - if there are seven kids in need of a roster spot, pick the three you like and shelter them. The guys who won't be delayed and aren't at the top-end get traded off, either for draft picks or immediate help. Sign capable veterans at bargain basement rates - good examples this off-season include Kurt Sauer and Jason Williams. Picking up defensively sound guys who can do a variety of things (Mike Johnson, summer of 2007) and play 4th line minutes for cheap money is also important.

When a team is in an awful situation, with limited assets/prospects, sometimes a complete demolition is the best option. Most of the time, though, rebuilding on the run is the best way to do things - and it's what both of last years' Western Finalists did.