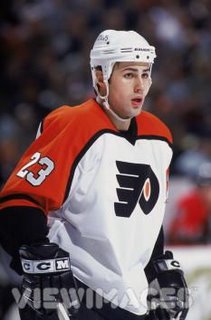 Jim Matheson is at it again, giving Oilers fans a wide sampling of team-related news even in the summer. While Geoff Sanderson is the primary subject of his latest column, Matheson also writes about the length of the off-season, the Oilers TV schedule, who best to replace Ray Ferarro on Sportsnet, and the obligatory reference to Rob Daum. Buried under all of these things is one line about a training camp tryout:

Tough winger Guillaume Lefebvre, who had cups of coffee in Philly and Pittsburgh, is on the main training camp roster on a tryout.

Lefebvre was drafted out of the QMJHL in 2000 by Philadelphia, and played 38 games in the NHL to date, recording 6 points and 13 PIM. He's spent the last two seasons in the LNAH, despite playing quite well for Wilkes-Barre of the AHL in 2005-06. This translated article from RDS references Claude Labelle, the G.M(?) of the St. Jean Chiefs, who said that Lefebvre decided o return to Quebec for "personal reasons".

Lefebvre adds muscle, and a decent offensive touch at the AHL level, so I would imagine that if signed he ends up in Springfield, with very little chance of cracking the Oilers roster.