Flash In The Pan

Share All sharing options for: Flash In The Pan 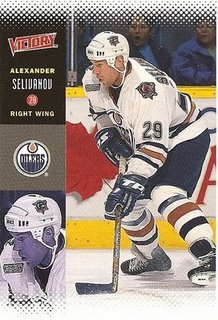 Alex Selivanov has had an interesting career. He was a 6th round pick of the Philadelphia Flyers in the summer of 1994, but was dealt to Tampa Bay for a 4th round pick that September. Getting traded to Tampa Bay guaranteed Selivanov ice-time, but it wasn't exactly the best place for a scoring forward to develop in. Those were some pretty sad Lightning teams, with Brian Bradley (a guy whose development curve Rob Schremp could mimic) the only consistent offensive threat for years. Selivanov had three seasons of middling offense, and in the middle of them he had one 31-goal year.

Eventually, Selivanov got traded to Edmonton in a three-way deal that also involved the Flyers. Philadelphia sent Alexandre Daigle to Tampa Bay, Edmonton sent Andrei Kovalenko to Philadelphia, and Edmonton ended up with Selivanov. Interestingly, all three are still playing in Europe, with Daigle being the last of the group to play in the NHL, back in 2005-06. Daigle now plays for HC Davos in Switzerland, Kovalenko dresses for Cherepovets Severstal, and Selivanov's coming off four seasons with the Krefeld Penguins of the DEL.

Selivanov was absolutely lethal early in the season. On November 14, 1999, Selivanov destroyed the Chicago Blackhawks single-handedly, scoring four times on five shots in a 6-3 win. The outburst gave Selivanov 14 goals on the year, tied for the league lead with Jaromir Jagr. It was all downhill from there. Selivanov scored 13 goals the rest of the way, and was held pointless in one of those miserable first round matches against Dallas that characterized the late 90's-early 2000's. Columubs signed him in the offseason to play on their second line; he scored all of 8 goals and hasn't played in North America since.

The guy Columbus had in front of Selivanov on their first line? Geoff Sanderson, who scored 30 goals to lead the team. He'd top 25 goals twice more, and looks to be finished now, although he could still get a tryout contract.