The Flash and The Substance

Share All sharing options for: The Flash and The Substance 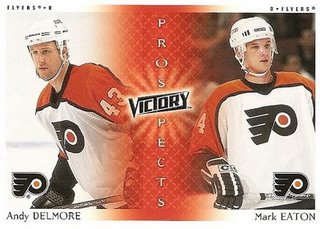 The 2000 playoffs are one of the more vivid memories I have of watching hockey at a relatively early age (I reminisce at 22; wait till I hit 60). German Titov had been picked up from Pittsburgh for Josef Beranek after Beranek had a return-to-Earth season (finished with 25 points after 49 the year before). It was the same year that Alex Selivanov briefly contended for the Art Ross trophy. The Oilers were done after five games, although the series was closer than that (Dallas won three one goal games, and both teams won a single game by three goals).

In any case, by the time the Conference Finals came around, I was cheering for Philadelphia and Colorado. I didn't like New Jersey; and I was angry that poor Robby Ftorek had been fired despite a nice regular season. Aside from that, the youthful enthusiasm of Brian Boucher was infectious and I wanted to see him win the Cup as a rookie (as an aside, sometimes a player looks so good as a rookie that there's nowhere to go but down).

Colorado wound up losing to Dallas; I had a hatred of Dallas for eliminating the Oilers that would only grow as the years went by.

That Philadelphia/New Jersey series was a vicious one. Scott Stevens killed everything that moved; starting with Daymond Langkow and then finishing off Eric Lindros as well. I've never understood good portions of the vitriol spewed at Lindros by some Philly fans, in particular those questioning his courage. Lindros was a prima donna, a guy who acted throughout his career like he was bigger than the game (refusing to play for the Sault Ste. Marie Greyhounds and then the Quebec Nordiques, demanding a trade to Toronto), but he deserved full marks for what he did in a Flyers uniform. Wikipedia has a nice breakdown of what happened, but in my books anyone who suffers a collapsed lung for his team deserves some slack. Lindros missed big chunks of the 1999-2000 season with concussions, and came back with two games left to play against New Jersey. Everyone knew what was going to happen, and sure enough, Scott Stevens drilled him. Lindros wasn't cleared to play until the following December.

Aside from Brian Boucher, the other player who caught my attention was Andy Delmore, an offense-first, nothing-second defenseman who I saw score a hat-trick against Pittsburgh (that Pittsburgh series was a beauty - Keith Primeau's overtime goal in game 4 remains one of my favourite memories, mostly because my dad let me stay up to watch the game). I don't remember seeing Mark Eaton at all.

The thing is, I think a lot of fans fall in love with guys like Delmore; guys who score goals, do flashy things, carry the world on their shoulders. Players like Eaton blend into the background - Eaton doesn't even throw big hits, he just plays smart positional hockey. But at that point, I bet that almost all NHL managers/coaches/scouts would have been able to tell me that Eaton was going to have a nicer career than Delmore. Right now, Mark Eaton (who didn't have a goal in those playoffs, btw) is over a hundred games up on Delmore and has an NHL contract for next year (he'd be even further ahead if he could stay healthy). Delmore just finished up a season with the Hamburg Freezers in the DEL.

The point (and yes, this is tangentially Oilers-related) is that when looking at young prospects, it's a good idea to bet on the safe pick - the guy that is consistently able to keep his head above water, not the fun but wildly inconsistent scorers who get lost in their own end. It's the same reason that Shawn Horcoff has a career and Michael Henrich doesn't, the reason a guy like Kyle Brodziak gets a shot. They don't need to bring offense to be useful. There's something there beyond the flash.