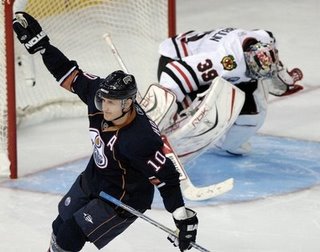 Shawn Horcoff has signed a 6-year, 33-million dollar contract with the Edmonton Oilers.

Needless to say, I'm thrilled about this going forward. As I've noted previously, Horcoff is an in-his-prime, legitimate number one centre, and he contributes nothing but positives in every aspect of the game.

With Horcoff locked up long-term, Sam Gagner has time to mature into the incredible player that he almost certainly will become; the two of them should be one of the top 1-2 punches up the middle for the next half-decade. What to do with Andrew Cogliano can wait until another day, suffice to say that if he isn't viewed as a winger, his future with the Oilers is in some jeopardy. Particularly if Brodziak/Pouliot can be effective in the number 3 slot.

5.5 million cap hit per season really isn't bad for what Horcoff brings to the table; while I doubt he'll be consistently as effective as he was last season, he should be a first-line, 70-point, tough-competition outscorer for at least the next 2-3 years.

The only unfortunate thing, from my perspective, is that the Oilers organization timed this signing to obscure a different negotiation.