Share All sharing options for: Rating the Free Agent Transactions So Far 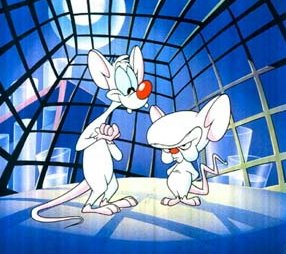 Pictured above are NHL general managers Don Maloney and Francois Giguere. I'll let you guess which is which. Here's a hint:

Kurt Sauer is in my mind the best signing to this point in time. I've got a mark up for all of the teams who made moves today (much of the information is from TSN.ca's Signing Tracker). The grades are based on a combination of team situation, money, term, and of course, player value.

*Boston - C - The Bruins have signed Michael Ryder for 12M over 3 years. I've discussed Ryder in the past, and had him pegged as a possible bargain signing this off-season. I figured he'd be excellent value at 2.5M/yr. Evidently, I (yet again) underestimated the foolishness of NHL GM's. Ryder has a chance at being worth 4M/year, but it isn't a good one.

*Chicago - C- - Cristobal Huet at 5.6M per year for the next four years is nice moving forward, but I have to believe that there is a deal in place to move Khabibulin, because if there isn't this is easily the worst move of the day for next season. Brian Campbell, a rather nice defenseman, was signed at an enormous amount of money (7.1M a year over 8 seasons), further compounding Chicago's cap difficulties, but also making it clear that this team expects to be competitive next season.

*Colorado - F - Andrew Raycroft is not worth an NHL contract, no matter the money. .876, .894 and .879 are just awful numbers. The Darcy Tucker contract (4.5M/2yrs) was just plain bad money management, and will not turn out.

*Columbus - B - Acquiring Torres for Brule is a nice move by Howson, although overpaying Commodore (5 years, 18.75M) was just an OK move.

*Detroit - A - Ty Conklin is a very nice backup at 750K, and I have to think that he took a smaller payday to land in Detroit, because it's hard to see him not getting more money from Buffalo, Colorado or Ottawa. Brad Stuart at 3.75M/yr is below market value too.

*Edmonton - B+ - Erik Cole is a great player, and I don't mind Gilbert Brule as a prospect risk. I'm sad to see both Pitkanen and Torres go, but the Pitkanen trade was inevitable given the Visnovsky trade before (the best trade of the three, incidentally). Torres was an extremely good EV player, and very underrated by most Oilers fans.

*Florida - B - Cory Stillman is a good player, even at 3.2M/yr for the next three. Consistently underrated and should be a nice complementary scorer on a team that needs one.

*Los Angeles - C+ - Picking up Gauthier as a boat anchor is fine for a rebuilding club, the real gain here was the 2nd round pick for a pair of ECHL'ers. On the other hand, the Visnovsky trade a few days back was pretty ugly.

*Minnesota - A- - Andrew Brunette signed a 3yr/7M contract, and he is worth the money. A very nice complementary player. Marek Zidlicky is a great pickup, at a not bad price player-wise and dollars-wise.

*New Jersey - C+ - Salvador and Pandolfo are nice players, even at 2.9M and 2.5M/season. Brian Rolston, on the other hand, is a huge gamble at %M/yr for the next four seasons. Bobby Holik isn't even close to being worth 2.5M/yr at this point in his career.

*New York Islanders - C- - Mark Streit signed for 5 years at 4.1M per season, which is lower than I thought he'd get but still way too much to pay for a one-trick pony. This signing will not work out well, but it won't be Redden-level disastrous. More like Sheldon Souray-level disastrous.

*New York Rangers - D - Aaron Voros (no terms disclosed) is a big body who can fight but isn't really good at anything else. Pat Rissmiller, on the other hand, is decent against decent opposition, as well as a big body, and could come in handy. Rozsival at 5M/yr is an OK signing, and he certainly is an important piece on the back end. The big killer here is Wade Redden on a 6yr/39M contract that he has no chance of ever living up to. That is a ton of money for a guy who needs to be protected from tough opponents and makes a bunch of questionable decisions. It makes the Souray contract look decent by comparison.

*Ottawa - B+ - Alex Auld is easily worth the 1M/yr that Ottawa gave him over two years, and is the best bet among the available goaltenders to pull a Mathieu Garon and challenge for a starting role. Additionally, he lives in Thunder Bay (my aunt is his neighbour) and should enjoy playing in Ontario.

*Philadelphia - B+ - Ossi Vannanen is a very nice bet at only 1M next year. This, combined with dumping Denis Gauthier, makes it a nice day for Philly.

*Phoenix - A - Kurt Sauer at 1.75M/yr for 4 years is the very best contract signed
today. He plays the best players in the league well, and is signed for basically no money. Todd Fedoruk (no money details) is an enforcer who can play.

*Pittsburgh - B- - Mark Eaton is a bargain at 1M/year for two seasons. Resigning Pascal Dupuis at 1.4M/year isn't bad either.

*Tampa Bay - A- - Radim Vrbata is a great signing at 9M over 3 years. Adam Hall at 3 years, 1.8M is a good depth signing. Olaf Kolzig at 1.5M/yr is a slight overpay, but he could easily be worth the money and they needed an insurance policy.

*Toronto - D+ - Curtis Joseph at 700K is an OK addition, but Jeff Finger at 3.5M/year for the next four is a brutal decision. It isn't that he's bad, exactly, he just isn't worth the money and joins a pile of highly paid Maple Leaf defensemen. I'm not really, really down on signing Hagman to a 4-yr, 12M contract, but it isn't the best use of money.

*Vancouver - C - Darcy Hordichuk is a pretty insignificant addition one way or the other.

*Washington - C - Two years of Theodore for 9 million is a poor decision dollars-wise that probably won't work out well. This past year was his only decent post-lockout season.