Share All sharing options for: Patrick Thoreson Returns to Europe 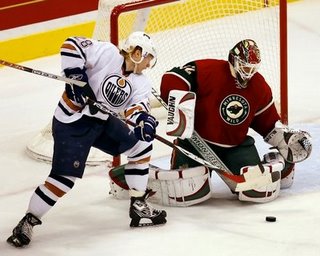 "I wanted a so-called one-way contract, which is to say the same salary regardless of whether I played in the NHL or a farm team," the 24-year-old Norwegian told the state radio network NRK on Tuesday. "That makes things more predictable for me and my family."

In February, the Flyers claimed Thoresen on waivers from the Edmonton Oilers, which he joined in 2006. He said because that club change was so recent, he can't immediately negotiate contracts with other NHL teams.

"That made matters difficult and is also the main reason I've decided to spend a year in Europe," said Thoresen, who turned professional in 2003. "After that, I'm a free agent."

The Oilers lost Thoreson on waivers earlier this season. After his departure, Thoreson had some cutting words, essentially ripping the Oilers for playing first round draft picks that in his mind, were less prepared for NHL duty than he was. While it made sense at the time, given that there was no room for one more smallish forward, especially one whose scoring touch was inconsistent, and who was consistently getting outscored (albeit against legitimate opponents), Thoreson had been a fan favourite.