Glen Murray: Less Washed Up Than You Might Think 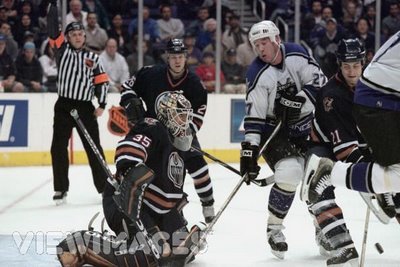 This is Glen Murray, when he "played" for the Los Angeles Kings (he showed up every other season). Going by his opponents (Smith/Marchant) this must have been during one of his good years.

I've always disliked Glen Murray. I have to admit that I haven't watched him much as a player, although I hear he makes Marty Reasoner's skating look like Pavel Bure's. I had a social studies teacher in school who played hockey with Murray prior to his OHL days, and one time he told used Murray as an example of arrogance and told an anecdote that I've since forgotten.

In any case, TSN reports that the Boston Bruins have put Murray on waivers, likely to fit in Dennis Wideman's new contract. Now the Oilers are fairly strong on right wing, so I doubt that Murray's a player of interest to them, but he just might be to the Canucks, particularly if Boston ends up buying him out.

In 2007-08, Murray declined in points for the 4th consecutive season, and scored fewer goals than he had for 8 seasons prior. There are a few caveats worth noting about him, however:
1) Only six teams scored fewer goals, 5-on-5, than Boston.
2) According to Behind the Net, Murray was lining up against first-line opposition.

The second point is the most interesting to me. While Boston is a defensively sound team, and Murray played with nice linemates, he had a 1.87 GAON/60, which at the very least shows that he bought into the system. With that in mind, it perhaps shouldn't be surprising that a 35-year old forward with foot-speed issues had a rather ugly 1.31 PTS/60.

A more damning indictment of Murray is the fact that he put up only 2.67 PTS/60 on the powerplay, second-unit numbers at best. Despite this, he was scoring 1.60 goals/60, and the powerplay was functioning just fine when he was on the ice, so perhaps it isn't all bad news.

With all of this in mind, and especially remembering how Murray tends to follow up bad seasons with good ones (and vice versa) I think Murray would be a good bet for a team trying to reach the salary floor and short of forwards (Los Angeles), or if bought out, for a team desperately trying to cobble together some offense (Vancouver), especially if signed to a one year deal.

He should be, however, of no interest to Edmonton.