Share All sharing options for: Erik Cole an Oiler 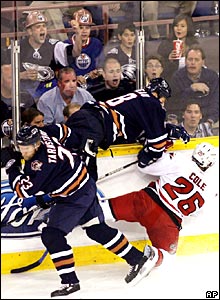 The most rampant rumour around these parts has been the Cole for Pitkanen trade. Today it happened, although we still don’t know if it was a 1-for-1 deal or if Edmonton received other assets as well. If it was 1-for-1, Rutherford got the better end of the deal.

Erik Cole played the toughest opposition of any Carolina forward this past season, scoring at a 2.10 PTS/60 clip at even strength and his line outscored the opposition 3.53GFON/60 to 2.64GAON/60. He is a very nice player with a physical dimension as well. He isn’t a great powerplay option (3.13 PTS/60) based on this past season, and he doesn’t play much on the penalty-kill.

I will update this post in a little bit, once the details are confirmed.