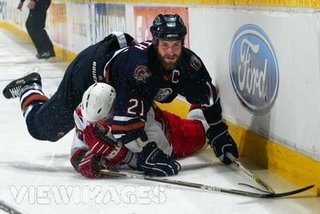 With Kevin Lowe improving the forward corps by switching out a couple of tough minutes pluggers (Stoll, Torres) for a tough minutes scorer (Erik Cole), the top-six for the Oilers looks pretty well set. Unless you're one of those folks that prefer to see Cole on the third line (and I'm not saying it wouldn't be best, just that I don't see it happening), it seems fairly self-evident that the top-six going into next season is Hemsky, Horcoff, Cole, Gagner, Penner and Nilsson, which is a pretty legitimate bunch with a nice combination of size and skill (although a little more toughness wouldn't hurt).

The bottom-six features three sure things- a young scorer who would be the first choice to move up in the event of injury (Cogliano), a veteran outscorer (Pisani) and a very nice young 4th line forward (Brodziak). Ethan Moreau, if healthy, would be considered a sure thing as well, and while the team could really use what he brings to the table (size, toughness, checking ability), his health will likely be in question for every game between now and hs retirement. This leaves three more spots, and the smart money says Pouliot, Stortini and one of Potulny/Schremp fill them up.

However, if the Oilers move into next season (where the playoffs are a must, IMO) with that lineup, there are a couple of problems:

1)Inexperience up the middle (only Horcoff has more than one NHL season under his belt)
2)Tough minutes forwards - only Pisani can be absolutely counted on to take a tough minutes role.
3)Depth. There will be injuries to the forward corps, and while there are a number of youth in the skill category, the leading candidates for checking role work are all lacking (O'Marra had a brutal 2007-08, Sestito doesn't really belong in the NHL, Reddox looks like he's 12, Brule has shown no ability to shutdown even 4th line competition)

I think the Oilers sign one veteran, and that they dress 14 forwards so as not to lose Potulny on waivers. IF they sign a veteran, the smart money is on the affable and gregarious Marty Reasoner, who I really, really like but at this point time shouldn't be anywhere near this roster. Sorry, Marty.

Here are a half-dozen options that would solidify the bottom-six, although regrettably none of them add the toughness/size dimension I was hoping to find. If you have a candidate who can play hard minutes and add toughness, please mention him in the comments.

1) Josef Vasicek. Seen above hiding under Jason Smith (I miss Smith), Vasicek was a bargain for the Islanders this season. He played the 6th toughest minutes among Islanders forwards, scoring 1.57 points/60 and posting a modest but positive goal differential. He adds size (6'4, 200lbs) and faceoffs (55.6% last season) along with decent scoring ability. He signed last year at 750K, and should be able to be had for Marty Reasoner money. He's only 27 and could be a good, cheap, relaible bottom-six option for a number of years.

2) Mathias Tjarnqvist. He played the 2nd toughest minutes on a poor Coyotes team last season with bad linemates, and somehow finished only -.15/60 in goal differential last season. He has nice size (6'2, 196lbs) but no scoring ability to speak of. He's 29 years old.

3) Sergei Brylin. Brylin's been playing tough minutes forever for New Jersey, and last year ranked 4th in QUALCOMP on the team. He's older (34) and smallish (5'10, 190lbs) and last year couldn't score to save his life. He's been a decent scorer in the past, but he could be near the end of the line.

4) Jan Hlavac. Many will laugh at seeing Hlavac's name here, but he had a really good season last year. He's older (31) and not large (6', 201bs) and doesn't add a physical dimension. Yet, last season he played the toughest minutes on the Predators, just barely got outscored, and still produced at a rate of 1.81 PTS/60. He may be worth a phone call at least, if he's willing to sign on the cheap.

5) Martin Gelinas. Ex-Oiler Gelinas had an off-year offensively, at least by the counting numbers, but outscored the 6th toughest opposition (among Nashville forwards) and scored at 1.72 PTS/60. He's now 38 but could be a stop-gap measure for next season while Brodziak and Pouliot get used to more responsibility.

6) Curtis Brown. The biggest wildcard on this list, Brown played in only 33 games (due to a combination of injuries and Ron Wilson disliking him) posting 9 points. He played limited ice time against the 4th toughest competition (among Sharks forwards), outscoring them with a very nice 2.83GFON to 1.96GAON. He averaged just over 10 minutes per game when he did play, but scored at a rate of 1.96PTS/60, indicating much better offensive ability than one would suspect coming from a guy with 9 points. He went 59.2% in the faceoff circle. He's 32 years old and still seems to have some game left, and is reasonably sized but not big (6', 200lbs). It's a good bet that he'd be willing to sign for 600K/yr, and at that money has a really, really good chance of outperforming his contract. It's a good bet MacTavish would love him, and HFBoards types would be angry at him for taking a roster spot from Brule.