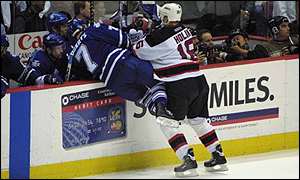 As we approach July 1st, I'm doing a new segment on this blog, called "UFA Option". Basically, I scan the list of unrestricted free agents and pick out players who may be of interest to the Oilers, and also examine what it would take for them to fit in well here. The first player I've chosen is Bobby Holik.

Bobby Holik (career stats) has been on extended playoff runs on four occasions, including two cup wins, with the New Jersey Devils. At one point, he was a reliable 50-60 point guy, playing tough opposition, and adding a menacing phyiscal edge on top of everything else. The last three seasons, Holik has played outside of the spotlight with the Atlanta Thrashers, spending this last season as the team's captain.

If the Oilers were to sign Holik, it would be as a 3rd line, shut-down centre; his nearest Oilers' comparable is Jarret Stoll. Is that an upgrade? Let's breakdown the two players statistically.

At even-strength, Stoll played the toughest competition on his team, while Holik matched up against the 4th toughest. Both players did the job with middling teammates. Here are there respective results at even strength:

Both players had similar numbers defensively, but Holik isn't quite the black hole offensively that Stoll was this past season.

On the powerplay, Stoll plays as the point on the first unit, while Holik plays on the second unit in Atlanta. I'd give Stoll the big edge here, but they aren't really statistically comparable.

On the PK, Holik was used surprisingly little, while Stoll was a mainstay for the Oilers. Here are how their numbers compare:

Stoll with a clear advantage here.

As for other items of note, both players are outstanding in the faceoff circle (Holik with a 58.3% mark this season) and both players led the forwards on their teams in minor penalties (Holik with 40, Stoll with 36).

Stoll played a larger role than Holik, and played it more effectively. Furthermore, while this previous year was the worst of Stoll's career, for Holik it was on par with his previous three seasons. Add in the fact that Stoll probably comes cheaper than Holik would, and I think the answer is clear.