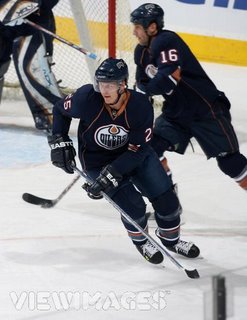 If the Edmonton Oilers had a player of the month this May, it would be Joni Pitkanen. He's been the main story and bookends this month nicely for the Oilers. On the first of the month, I wrote about his debatable injury playing with Finland at the World Championships. Since that time, I've written five entries where Pitkanen has been one of the players starring. His contract status and intriguing potential have made him the story of the month. Then, today, comes this article from Jim Matheson, and if we read between the lines, we get the feeling that Pitkanen will be resigned. There's a quote from Charlie Huddy, and the old "don't give up on young defensemen" admonition, and if I were keeping him, that's how I would spin the story to Matheson. So much for the Erik Cole talk.

The story receiving almost no attention (save for on Lowetide's site) is that revolving around Shawn Horcoff's status with the team. The longer he goes unsigned, the greater the inclination is to compare his situation to Ryan Smyth's a year ago- they left it to the deadline, and we all know what the end result was. Horcoff is a pivotal piece, and it would be nice to know if they've even talked contract with him yet.

Still on the player front, the contract negotiations between the Oilers and Curtis Glencross appear to have stalled. The reports coming out of the Journal (alright, coming from Matheson), consistently indicate that the Oilers have drawn a line in the sand and are refusing to pay Glencross more than a 4th liners' wages. This is nothing but good news for Raffi Torres, who seems likely to be dealt if Glencross signs a deal before the entry draft.

Fernando Pisani! was nominated for the Masterson trophy and, if there has ever been justice in the universe, will easily win over fellow nominees Chris Chelios and Jason Blake.

Several Oilers played at the World Championships. Other blogs (The Real Deal, for one) did a much better job of covering what went on there. Copper Blue Dreams did up a nice post with the statistics of Oilers at the WC.

The Old Boy's Club was another dominant theme for the month of May. My blog is littered with entries wondering which individuals (Rob Daum, Craig Simpson, Kelly Buchberger and Jeff Truitt) would wind up where in the Oilers organizational game of musical chairs. The verdict- it seems likely that all but Simpson will be with the organization in some capacity, (although Daum would certainly jump if offered a decent coaching position), with Buchberger and Truitt both getting the spots they want.

Josef Hrabal, Bryan Pitton and Garet Hunt all signed contracts with the Oilers during May, and word came today that Taylor Chorney had agreed to a three-year contract after initially balking at the terms. Still with prospects, the Oilers are holding a development camp (starting today), and Guy Flaming has an insanely comprehensive list of who will be in attendance. I'd earlier posted a (skimpier) breakdown on the unsigned players in attendance. Also in May came the (unsurprising) news that the Oilers were seriously scouting Joe Colborne, and that Camrose Kodiaks captain Owen Chatwin is of interest to the team as a late-round selection.