For this relief much thanks

Share All sharing options for: For this relief much thanks 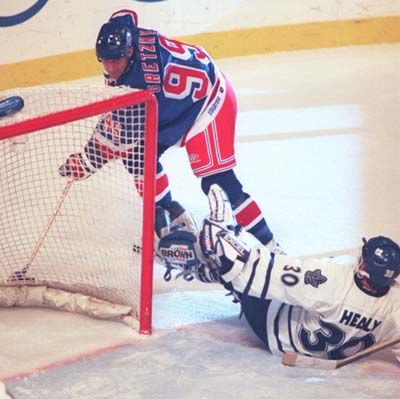 The Globe and Mail has been nice enough to pass along news that should make everyone who's ever watched hockey on TSN sigh with relief.

This shouldn't be especially surprising, given the staunchly pro-union stance Healy took during the lockout. I wasn't a fan then, and I'm not a fan now. Sometimes, listening to Healy providing colour for games, I wonder if we're watching the same one or not. I recall a Chicago-Edmonton tilt last year, and a penalty was called on the Blackhawks. I saw it, and was wondering if it would be called as the referee put his hand up. On the other hand, as the whistle blew, Healy was confused by what was happening, wondering if the team had gone offside. Now, I can understand missing the occasional call, but as the referee is motioning a penalty, it should be apparent what is occurring.

It wasn't just his poor ability to follow the play that bothered me, though. Poor analysis, often blatantly wrong, was a hallmark of Healy's style. Combined with his personal opinions about hockey, and his sputtering delivery of them, it was enough to drive a fan to the mute button.

The Globe and Mail was also nice enough to give fans like me a little laugh:

"He has been among the best game analysts in hockey."