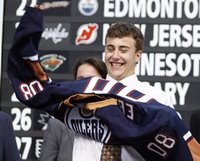 I'll get to what the Oilers did in a second, but first I'd like to go throught the various trades and some of my impressions from the top 10 picks. Darryl Sutter was the arguably the busiest GM on draft day (with the possible exceptions of Garth Snow and Dean Lombardi). Despite what virtually every media talking head has claimed, however, I don't think he really improved his team. Let's look at what he did, exactly:
1) Calgary trades the 17th overall pick to Los Angeles for Mike Cammalleri
2) Calgary trades Alex Tanguay to Montreal for the 25th overall pick and a 2nd round pick in 2009.

Basically, what those two trades equal out to from a Calgary perspective is Mike Cammalleri for Alex Tanguay, and as an Oilers fan, I think I like it. At even strength, Cammalleri played the second softest opposition among Los Angeles forwards, and was brutally outscored this season (2.60 GFON vs. 3.56 GAON/60). He is, however, a first-rate powerplay option for the Flames. Alex Tanguay, conversely, played the most difficult opposition of Flames forwards 5-on-5, outscoring the other team 3.29 GFON to 2.32 GAON/60. His points/60 minutes was second only to Jarome Iginla among Flames forwards. He did however, have a very poor season on the powerplay.

In other words, Calgary traded away a slightly bigger, slightly older, more expensive forward who has is a good even strength producer, even against tough opposition, and is not a great powerplay option for a slightly younger & smaller forward who has untapped offensive potential and produces on the powerplay, but has yet to show any ability to out-score at even strength, even against soft opposition. This may be a good deal long term, but I don't think Calgary is built for the longterm.

The other big trade of the day went a long way towards reinforcing my view that Jacques Martin isn't a particularly good general manager. Here's the trade:

Keith Ballard is clearly the centrepiece of this trade, from a Florida perspective. He's a 26-yr old offensive defenseman who has had declining offensive numbers since his rookie year three seasons ago. He did, however, pair with Derek Morris this past season against the toughest opponents, and did very well. Ballard is also a good powerplay option, both in terms of GFON/60 (8.69, although this should be balanced against a 3.26! GAON/60) and pts/60 (4.34). From a Coyotes perspective, I think his powerplay time gets taken by Keith Yandle, but without a doubt they now need someone to pairwith Morris. Nick Boynton got killed by soft opposition, and every time I've seen him play it just seems like he's lost a step that he couldn't really afford to lose. He's also overpriced.

Jokinen is a good powerplay performer, and although it certainly seems like he could be a more complete player 5-on-5, he isn't awful either. He's got a ton of physical talent, but consistency seems to be a big issue with him.

Moving on to the draft:

*The Lightning took Stamkos, to the surprise of absolutely nobody, and Oren Koules announced the selection. He seems like a bit of a media doxy, and he has funny hair. Aside from that, I really can't see Feaster lasting the season, since this is going to be a "hands on" ownership group, and somebody needs to be fired when they mess everything up. Aside from that, Pierre McGuire sounded like an idiot with his constant praise of Barry Melrose as a good choice to coach the team.

*Drew Doughty goes at #2 to L.A., and I had to do a double take listening to Bob McKenzie. First, the kid gets compared to Ray Bourque, and then McKenzie described him as "vastly underrated". As much as I like McKenzie, I don't know how underrated the 2nd overall draft selection can be. Apparently, he also lost 25 pounds (in a positive way) last season.

*I think it's funny that Pietrangelo (4th to St. Louis) went out and bought a "Seen Stamkos" bracelet and bumper sticker. Going solely by interaction with James Duthie, Pietrangelo was the best kid at the draft.

*Garth Snow made a move that many of those who comment on the Oilers probably loved- he traded down from 5th to 9th, adding two second round picks and a third rounder as well. Presumably they weren't terribly high on Filatov or Schenn, and this could certainly be a series of trades that pay off for the Islanders.

I'm not nearly as qualified as some others to evaluate amateur talent, but there are a few things I like about this pick:
1) I think the Oilers chose "best player available" despite specific team needs (centres, for example, over 5'11" tall).
2) He's a goal-scorer, rather than a playmaker, which actually does fit a team need nicely.
3) He's a later 1990 birth-day, making him younger than most of the players in the draft. Lowetide has commented on the difference age makes for a prospect, and I'd argue that a, say 6-month difference at 18 is significant enough that it should be factored in when teams make their selections.
4) The Pats, Eberles junior team, scored only 217 goals, so it seems possible that he could have scored more than 40 on a better offensive team.