We Are Pleased to Promote...

Share All sharing options for: We Are Pleased to Promote... 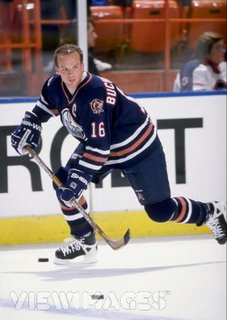 According to one Robin Brownlee (be careful of that link- if it's still early when you may not want to see Marty York's beaming face on the side), Kelly Buchberger has been officially anointed as saviour assistant coach of the Oilers, dooming Rob Daum to haunts unknown, and allowing Jeff Truitt (see post below) to ascend to the rank of Wing Commander with the Springfield Falcons (because birds have wings- I said because birds have... nevermind, it isn't funny if I have to explain it).

Personally, aside from the unpleasant boot applied to Rob Daum's rear end, I like the move. Frankly, Jeff Truitt seems a little more qualified to be the primary mentor/development coach down on the farm, and I think a guy as relatively inexperienced as Buchberger could certainly grow under MacTavish's watch. Also, I tend to think of head coach of the AHL team as a more pivotal role than being MacT's third assistant coach- it's a role that has a tremendous impact on Oil prospects.

Plus, with all the hue and cry for a real heavyweight enforcer, maybe Buchy can coach Zach Stortini into a dominating fighter, eerily reminiscient of a young fist head-butter Kelly Buchberger.