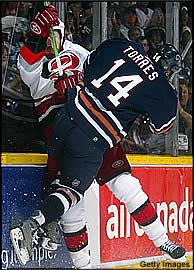 I quote from the Metro News quite a bit, now that Robin Brownlee has taken to writing a weekly piece for them. This post will site a quotation from another one of their writers, former Sportsnet CFL analyst Marty York (seen here in tinted glasses and a very dapper red-and-white striped shirt).

Now, the last I'd heard of Marty York was last August, when Lowetide quoted him as reporting the Oilers had made a contract offer to Peter Forsberg. I have no idea whether that actually happened, but some quick googling of "Marty York CFL" and "Marty York NHL" reveals that a lot of people have a less than stellar opinion of his commentary. Anyways, without further ado, the quotation:

Interesting, and plausible rumours regarding the coaches. That isn't what we're after here, though. Torres for a defenseman sounds like the reciprocal of the rumoured Pitkanen for Cole trade that I talked about earlier.

I've mentioned before that I'm not a big fan of trading Torres at this particular juncture; his shooting percentage was so far below his own career average that I can't help but think he rebounds in a big way next season. Still, without knowing the name of the defenseman, it's hard to evaluate any potential trade.