Share All sharing options for: 'Tis Just a Flesh Wound! 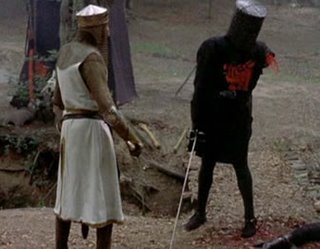 Matheson than links the soon to be UFA with the Minnesota Wild- Doug Riseborough worked in the Oilers organization while Smith was here, and Jacques Lemaire was familiar with Smith from his days in New Jersey.

Tim Panaccio, on the other hand, suggests New Jersey as a possible destination, especially given that the Devils inquired about Smith's availability at the trade deadline.

What about the Oilers, you ask? I certainly think there's a need for a veteran defenceman, and Smith could fit the bill. I'm concerned that with the sheer number of injuries that a guy like Smith takes, and given his age it may not be long before he hits the steep part of the downhill curve. But, that said, I hope he winds up closer to New Jersey than Minnesota; I don't want to see him in opposition colours for 8 games a season.