Something Weird in Vancouver

Share All sharing options for: Something Weird in Vancouver 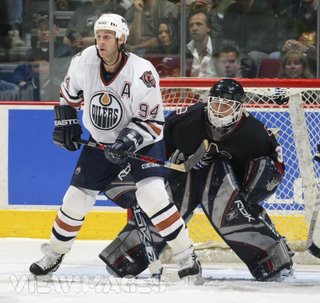 Interesting news came out of Vancouver last night- TSN reports that Vancouver Canucks assistant coaches Bary Smith and Mike Kelly have both been terminated by the club.

It's been an interesting month for the Vancouver Canucks, a month to the day since player agent Mike Gillis was hired to replace the fired Dave Nonis.

Let's review what Gillis has done so far:

"Coaches handle the assets they have been given. The assets here were lean at times."

Apr. 25 - In an interview with Iain MacIntyre of the Vancouver Sun, Gillis said the following:

"When I look at Sandy Alderson, he was the guy who basically reinvented baseball management," Gillis said. "He was a marine. Billy Beane doesn't attend games; he listens on the radio. How unconventional is that?
"Everything that has happened in Major League Baseball sort of preceded hockey by about 10 years. They went through the wars before we did, went through massive change on the labour front before we did.
"I think people will see more non-conventional management people [in hockey]. I'm hoping to bring that here - a philosophy like that. I don't think this is without precedent."

May 5- Gillis hires former Phoenix assistant GM Laurence Gilman as the team's capologist. Gilman was with the Coyotes/Jets from 1994 to 2007, and is a lawyer. In the same article he says he's surprised by a visit to Vancouver by his former client, Pavol Demitra.

May 12 - THN's Lyle Richardson reports that the Minnesota Wild have asked the NHL to look into possible tampering as impending UFA Pavol Demitra (a former Gillis client) was given a guided tour of Vancouver while still under contract to the Wild. The league finds no evidence of tampering, but Richardson suggests that this implies both Naslund and Demitra will be UFA targets of choice for the Canucks.

May 14 - Gillis hires Scott Mellanby as a special consultant to the General Manager. Mellanby retired at the end of the 2006-07 season, and spent part of the 2007-08 season as a between periods analyst for Hockey Night in Canada. Despite an impressive playing career, one wonders if it's really a good idea for a completely green GM to hire a completely green management type as his right-hand man, particularly since Mellanby will continue to be based in St. Louis.

May 22 - Gillis extends coach Alain Vigneault through the 2009-10 season. My read: Gillis extended Vigneault long enough that he won't be over his shoulder, but not so long that he can't fire him when it becomes neccessary. I'd be extremely surprised if Vigneault survives the next two seasons as coach.


Some of these decisions seem awfully curious to me. The Mellanby hiring in particular looks like failing to shore up a position of weakness. I'm not that skeptical about hiring inexperienced people; but I do think it's a good idea to offset their inexperience with somebody else who is experienced. Gillis seems to disagree.

The really interesting decision will be who comes in as assistants under Vigneault. My guess is that Gillis, not Vigneault, picks them, and that one of them is the next head coach of the Vancouver Canucks.