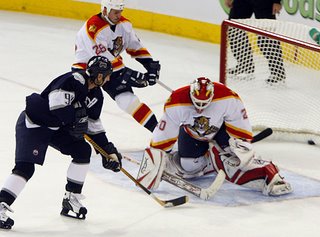 Earlier this week, I made a somewhat disparaging comment about the Florida Panthers' refusal to allow Joe Nieuwendyk to interview with the Maple Leafs:

Regardless, it is yet one more classy act from an organization that rivals the Islanders as the NHL's nut house.

If a hurricane destroys the BankAtlantic Center, home of hockey's Florida Panthers, Broward taxpayers will be on the hook for any damage over $150 million because the arena is underinsured....

This isn't the first time the commission has voted to shift tens of millions of dollars in windstorm risk from the Panthers' owners to the county. Twice last year, records show, commissioners OK'd even lower levels of hurricane coverage on the arena.

The insurance giveback could continue after that, too: Commissioners will revisit the issue again next year....

Meanwhile, there's a tussle over who should pay to install $1.7 million in roof reinforcements necessary to bring the arena up to current hurricane codes.

''Our insurance guy did an analysis and said the roof's coming off in a Cat 3,'' Geoghegan said in an interview. ``It would be a public relations disaster if the roof came off. It is our building, but we feel they are responsible to do that.''

Geoghegan asked Sunrise Sports a year ago to ''proceed as expeditiously as possible'' to fix the roof. But with hurricane season starting Sunday, the roof is still vulnerable.

Sunrise Sports should pay because the fix is a repair, not an improvement, according to Geoghegan. He said the contract obliges the team's owners to make repairs.

But the company won't concede a fix is necessary. It hired an engineering firm that concluded a wind tunnel test must be done, records say. The Panthers won't pay for the study, though. So, ''in the interest of preserving the county's investment,'' county staff recently freed up $46,000 to do the test.

Now, I'm not making any big statements about the arena debate. For starters, there's plenty of discussion, and Andy at Battle of Alberta (among others) has done an amazing job presenting reasons to preserve Rexall. Secondly, I don't live in Alberta, so I have no particular stake in whether the new arena is publicly funded or not. That said, governments need to be leery about partnering up with private organizations; a business will always act in what it perceives as its best interests, something that is often contrary to those interests of the government, and in some cases, the public good.

One thing I will say without caveat: the Florida Panthers are a poor team in a poor market, owned by people who don't know what they are doing, and run by a first-time NHL GM with a middling track record. It isn't a recipe for success.