Share All sharing options for: Oilers Sundry From Matheson 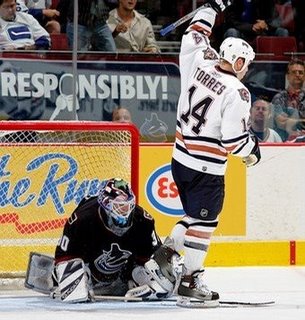 Jim Matheson's column today is a-brimming with this and that about the Oilers. This is a good thing, given the dearth of information trickling out; it makes writing these entries every day a little easier.

First up:
The Oilers are likely pitching unrestricted free-agent winger Curtis Glencross a two-year deal in the $1.1 million-a-season range, which would double last year's salary, but his Saskatoon-based agent Dave Kaye may be looking in the $2M neighbourhood, citing Glencross's goals-to-icetime ratio last year.

Give Lowe some credit here. Glencross' agent is using G/60 as his chief argument here in getting Glencross a bigtime raise, and the Oilers are offering a very reasonable 1.1M/yr. If they can get Glencross signed for that he'll be an excellent 3rd/4th line option.

If the Oilers do sign Glencross, left-winger Raffi Torres's days are likely numbered. He's prime trade bait, probably at the draft in Ottawa. The Oilers would like to move up from their 22nd draft hole, to, say No. 10, if possible.

Not exactly shocking news, I suppose, but I wonder how much of a market there is for Torres until he comes back from injury. If he does get dealt I sure hope it's out east, because I wouldn't want to play this guy more than once a year. He's not my favourite player, but he's a heck of a wrecking ball and shows flashes. Of course, he'll also be 27 next year, so the smart money says that he is what he is- a tough, reckless player with consistency issues. His highwater mark remains the 2005-06 season: 27 goals, 41 points.

Incidentally, if the Oilers really want to move up, they could trade Dustin Penner for the 12th, 42nd and 72nd picks- oh wait...

You can bet the Oilers would take a run at him [Ryan Malone] because they have to get more size on their top two lines, with only Dustin Penner a big body.
The other big man who would interest the Oilers, Sharks winger Ryane Clowe, may be off-limits because they'd have to make an offer sheet on the Group 2 free-agent and might not want to go that route for a second straight summer.

If I look really hard, I can almost make out a plan here- trade Torres at the draft to move up, and sign the player they'd hoped he would turn into. I'm a little leery of Malone; there were exactly 15 games this season where he wasn't drawing on to Malkin or Crosby's line. Here are his statistical breakdowns:

Actually, there isn't much to be made of that- his +/- and points totals barely fluctuate, and as much as I'd love to reference his goal scoring dropping, it isn't a large enough sample size. That said, the market for him is going to be pretty big; Clowe is a lot more attractive as a player to me. He only played a combined 28 games in the regular season and playoffs, but his statistics (28GP-8-9-17) along with 34 points in 58 games last season, and despite some time with quality players he faced a much more difficult matchup than Malone.

Matheson also gives us yet another Joni Pitkanen update:
Oilers Group 2 free-agent defenceman Joni Pitkanen remains in limbo. They likely won't offer him any more than, say, $3.5M next year off his spotty first Oiler season. He's a trade possibility, too... [b]ut there's likely not a big market for Pitkanen right now.

If Pitkanen wants a short-term deal, that 3.5M number isn't bad. But if that's what the Oilers are offering, the numbers TFP report a few posts down seem pretty reasonable as well. 4.5M over, say, 5 years? I remain optimistic. I'm also unsurprised there seems to be a minimal market for Pitkanen right now. Aside from his poor season, there seems to be a lot of behind the scenes stuff going against him. Quotes by guys like Eric Desjardins and Doug Shedden are just the tip of the iceberg- I'm sure NHL GM's hear a lot more.

The Oilers won't be replacing Lorne Davis, who died last December, in their amateur scouting group, but will use part-timer Mike Peluso to also scout some Western Canada games this winter. They are looking for a western pro scout to help out Dave Semenko.

Anybody want to make a wager that Lowe is offering Rob Daum that WC scouting job- or that he will turn it down? Aside from that, I also find it a little disappointing that we have not heard anything about possibly expanding the Oilers European scouting presence, which is far too sparse for my liking.