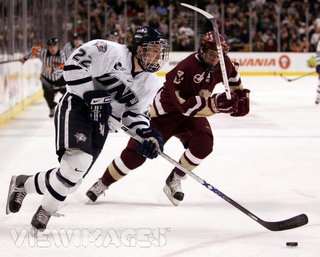 The Edmonton Oilers have announced a summer Development Camp for June 1st, and have posted a roster of the players who will be in attendance.
The roster mostly consists of prospects either early in their development curve or a little behind and striving to catch up (the headliners are Riley Nash and Theo Peckham), but it also includes some interesting names.

Four unsigned college players are slated to attend the camp, and one suspects that all four are being considered for professional contracts. A fifth, Les Reaney, signed a two year AHL contract and debuted professionally with the Stockton Thunder at the end of last season. With that in mind, let's look at who the Oilers will be looking at.

Mike Radja, forward, University of New Hampshire
69GP - 38G - 42A - 80PTS over the last two seasons
An assistant captain with UNH, Radja (pictured above, #22) is probably most famous for his arrest after an altercation with T.J. Oshie of the St. Louis Blues.

The leading hockey scorers for the University of New Hampshire and University of North Dakota have been suspended after being arrested in North Dakota during the weekend.UNH's Mike Radja and North Dakota's T.J. Oshie were arrested early Sunday on disorderly conduct charges, a few hours after facing each other on the ice. Police said they were arrested at the Oshie's apartment in Grand Forks.Police have not released further details about what prompted the arrests. UNH coach Dick Umile said Radja would be suspended for at least the two games the team is playing this weekend. North Dakota coach Dave Hakstol said Oshie will miss Friday's game at St. Cloud State for violating team rules.

Beyond that, Radja seems like an extremely talented player with a knack for goalscoring, but it should be noted that he apparently has a history of disciplinary problems.

Bates is a good sized forward (6'3", 195lbs) and turned 23 in January. He was the captain of his NCAA team and has a reputation for hard work and off-ice intelligence, two attributes the Oilers seem to value. From the Quinnipiac Bobcats website:

"I’m very excited for Jamie," said Quinnipiac men’s hockey head coach Rand Pecknold. "He’s been a great player for his four years at Quinnipiac and has worked very hard to get where he is today. He’s also a model student-athlete and this is a testament to his character."
Bates is scheduled to graduate in May and will continue the required coursework for a bachelor’s degree in finance while embarking on his professional playing career.

Schwarz, Michigan Tech's assistant captain, has the reputation of being a solid stay at home defenseman. He turns 24 in June, and certainly has big league size (6'3", 210lbs), and is the type of player the Oilers have had success with.

K.D. Warvie of the Mining Gazette did a profile on Schwarz. The following is an excerpt.

"My role is to be consistent every night, to be a steady presence on the back end, and keep the puck out (of the opponent’s offensive zone) as much as I can," Schwarz said. "The offense may not always be there for me, but I try to take care of the defensive side every night."

Warvie goes on to detail how Schwarz took one of the young defensemen on the team under his wing, just as he was when he joined the team.

The scouting report below is from Ferris State University's website:

An active skater . . . Exceptionally strong . . . A well-conditioned athlete . . . Regarded as a cycler with great ability to finish . . . Possesses an excellent shot and a quick release . . . Has a nice scoring touch . . . Has potential to be a highly-capable goal scorer . . . Willing to sacrifice body in creating scoring opportunities.

Reaney had been a reliable scorer for his first two seasons with Niagara after leaving the BCHL, but struggled during the 2007-08 season, putting up 15 points in 25 games. Adam Wodon of the College Hockey News talks about what prompted Reaney to sign with Springfield.

As if it wasn't enough that Kyle Okposo and Brock Trotter made unprecedented mid-season moves from college teams to NHL contracts, a player from Niagara of all places added to that list.

Last week, Les Reaney, the CHA Freshman of the Year two seasons ago, up and left to sign a pro deal with the Edmonton Oilers.

In Okposo's case, he was courted, controversially, by the team that once drafted him highly in the first round, the New York Islanders. In Trotter's case, he was actually dismissed from the university, forcing his hand.

But Les Reaney? After being a healthy scratch in two games leading up to his departure, he just decided to shop himself around and leave.

According to Niagara coach Dave Burkholder, there was no discipline issues involved leading up to it. He just felt that Reaney wasn't performing up to his standards.

"I was trying to motivate him," Burkholder said.
Burkholder believes Reaney simply wasn't happy about sitting out. When he was playing, he was often on the fourth line, and on the second power-play unit. He was leading the team with 52 penalty minutes.

When Reaney came to speak to Burkholder, Burkholder was afraid something was seriously wrong. He was shocked when he found out the actual news.

"I shook his hand, I brought him in the room, made an announcement to the team, he spoke, had some great things to say," Burkholder said. "He said, 'It feels like a championship team in here, but it's something I felt I needed to jump on today.'

"He was excited. I don't know what the contract was, but it's two years and it's guaranteed."
Adding insult to injury — probably moreso to Reaney himself than to his former team — Reaney will not even be in the American Hockey League; he was assigned yesterday to Stockton of the East Coast Hockey League.

It's an interesting situation, and one wonders if there isn't some kind of attitude problem with Reaney- the high PIMs and his apparent falling out with the coach would seem to indicate it. Of these five players, though, he's the one we're most likely to see- he already has a contract, an AHL/ECHL deal.

My guess is that the Oilers sign at least one more of these guys with the idea of seeing them play for one of Stockton/Springfield; both teams had difficulties keeping bodies in the lineup. It's an encouraging sign though - Edmonton has had some success with undrafted collegians, and it's an area where it would be nice to see some signings. We can safely assume that if these guys show something during the development camp that they'll get a shot when the main training camp starts this September.