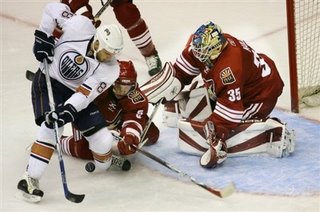 Entia non sunt multiplicanda praeter necessitatem - Literally translated, this means that entities should not be multiplied beyond necessity. From Wikipedia:

This is often paraphrased as "All other things being equal, the simplest solution is the best." In other words, when multiple competing theories are equal in other respects, the principle recommends selecting the theory that introduces the fewest assumptions and postulates the fewest entities. It is in this sense that Occam's razor is usually understood.

The career profile of Rob Schremp is one are where many fans could stand to apply Occam's Razor. Generally, people that express opinions strongly endorsing Schremp as a player are the same people who believe that Craig MacTavish is a bad coach. The reasoning behind this seems simple to me- if one assumes that Schremp is talented enough to play in the NHL last season, than the reason that he didn't must be attributable to the coaching staff's inability to recognize talent, or their inflexibility.

Given the success of players of lesser pedigree (Pisani, Horcoff, Gilbert, Brodziak, etc.) I think that an inability to recognize talent is clearly not the case; the coaching staff has done an excellent job of identifying players who have the ability to play in the NHL despite the fact that the consensus among the scouting community at their respective entry drafts was that they were lesser talents.

Inflexibility seems equally unlikely to me; Marc-Andre Bergeron, Mike Comrie and Anson Carter stand out as flawed players who the coaches used because they offered talent in a singular dimension that the team needed. Ales Hemsky, Sam Gagner, and even Robert Nilsson can be pointed to as examples of offense-first players who have successfully adjusted their game to MacTavish's coaching.

The simplest explanation for Rob Schremp spending the entire season in the AHL is that he simply was not a better option than the players he was competing with. A team needs a variety of skillsets, and some players (Brodziak, Stortini, even Pouliot) offered things to the team that Schremp could not. Of players with a similar skillset, Schremp was placed by the coaches behind Robert Nilsson, Sam Gagner, and if we're really inclusive Andrew Cogliano. I don't think a realistic argument can be made that Schremp deserved to make the team above any of those three players.

My personal view of Schremp's status as a prospect is here. Others may feel that he has more potential than I give him credit for. Regardless, I think we can argue that he is at this stage, and likely in the future, an inferior player to Gagner/Cogliano/Nilsson. For this reason, if he is NHL-ready (and I think that at the very least he's close) he needs to be dealt this summer. The Oilers have areas of need, Schremp is a valuable asset, and they risk, in my opinion, devaluing him further if he starts another year in the minors. He should be dealt sooner rather than later.