Mathieu Garon as a Starting Goaltender

Share All sharing options for: Mathieu Garon as a Starting Goaltender 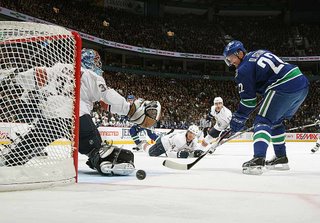 To the left, Mathieu Garon stops Daniel Sedin as Steve Staios and Andrew Cogliano look on.

Garon's future with the Oilers is something that has not been widely speculated on, as he has another season at 1.1M, and there are a few, more pressing matters (Horcoff, Pitkanen, Glencross, etc.) to deal with.

My feeling is that Lowe and MacTavish are not sure if Garon is the guy they want backstopping the team long-term. I think they'll give him another year to see if he's really the guy they want, and I think that's a mistake. I believe Garon's track record shows enoguh to sign him now, to a reasonable 3 or 4 year contract, rather than wait another year and watch his value shoot through the roof as an unrestricted free agent.

Some may point to his play down the stretch and say that Garon doesn't have the endurance to be a starter. I would argue that most starting goaltenders would struggle with 17 straight games (in only 36 days- Feb. 4-Mar. 13) and that most coaches would have managed to sneak the backup in there for a game (say, Feb. 28 agaisnt LA or Mar. 2 against Columbus). Garon is perfectly capable of playing 60 or so games- and that's good enough for me.

Others would say that Garon hasn't been tested as a starter, and that he doesn't have the track record. Here are Garon's career statistics. For comparison's sake, here they are below, along with the team's other goaltender:

Looking at that track record, there is only one season that makes me question Garon- the 2005-06 season where he was outplayed by Jason Labarbera and the Los Angeles Kings finished 11th. That season, the Kings had regular spots on the blueline for Mike Weaver, Aaron Miller and Nathan Demsey, along with rookie Tim Gleason. Joe Corvo, Lubomir Vishnovsky and Matthias Norstrom made up the "real" NHL defensemen. The Kings that year lost over 300 man-games to injury, and off-ice issues with Jason Labarbera (see here) made Garon play far too many games in a row. There is no denying that it wasn't a strong season for Garon, but looking at his last four, it's the only weak one and it definitely wasn't with a powerhouse team.

Garon is a talented goalie, talented enough to be the starter on a team looking at contending, and barring a blockbuster trade or wonderful UFA signing, he's as good as it gets for Edmonton. Lock him up to a 3yr/12M contract now, before everybody sees it.