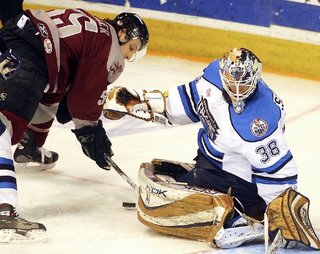 Jim Matheson's column today is, as usual, a must read for Oilers fans. He opens with a list of some of the Oilers prospects attending the conditioning camp in June. Apparently Petry will be returning to the University of Michigan Michigan State for at least one more year, while Taylor Chorney (as first reported at Coming Down the Pipe!) wants to sign a professional deal but there is some distance between the parties on dollars.

Matheson also mentions a local-born one-shot sniper who may be on the trading block- just the kind of player the Oilers like. Joffrey Lupul is apparently being dangled as bait for a speedy defenseman- maybe we could offer them Pitkanen. I've heard that trade described as a "fleecing" by several MSM-types eager to extol Paul Holmgren's virtues- and it was nothing of the sort.

Apparently Glenn Fisher has signed an AHL contract for next season, after posting middling numbers in the ECHL. This all but guarantees that Dubnyk/Fisher will be the tandem in Springfield next season, so I'd imagine that Lowe is figuring to deal Roloson at the Entry Draft. I'm not sure who they figure will claim Deslauriers (pictured) if they expose him to waivers, but the goaltending logjam has to be cleared up somehow. The good news is that we should get a very clear picture of where Dubnyk is at as a prospect next season.

I really don't want to go into 2008-09 with a Garon/Deslauriers tandem, because Garon has a track record of breaking down if he plays too many games, and I'm really not sure I want to see JDD getting 25 starts at the NHL level.

Update: Apparently Illegal Curve had the same idea that I did. I'd say something about great minds thinking alike, but I know the state of my mind too well and it wouldn't be fair to Pollock to make such a comparison.

Update II: Also, an alert commenter (see below) has been kind enough to point out a minor error in the Matheson article (which I missed as well). Jeff Petry plays for Michigan State, not the University of Michigan.