I Said NO, Cliff!

Share All sharing options for: I Said NO, Cliff! 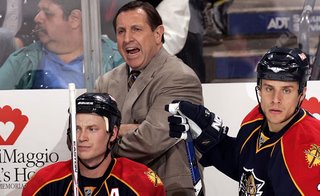 According to TSN.ca the Florida Panthers (led by their fearless GM, Jacques Martin) have denied the Toronto Maple Leafs permission to talk to Joe Nieuwendyk, who is under contract to the Panthers until July 1.

Now, I have watched with a modicum of amusement while the Maple Leafs requested permission to speak with Sharks GM Doug Wilson and Red Wings executives Ken Holland and Jim Nill. The Sharks, quite rightly, refused to allow the Leafs to interview Wilson for the same position he holds with their team. I assume the Leafs were acting under a "nothing ventured, nothing gained" mentality, since I can't think of any reason they would have assumed Sharks ownership would permit poaching.

Similarly, the Red Wings were right to refuse contact with Holland under any circumstances, and in the middle of a cup run and draft preparation, Jim Nill was fairly obviously off limits too.

Today's news, however, boggles the mind. For starters, Nieuwendyk has already resigned his position with the Panthers, and almost certainly will not be back with the team. Secondly, he would almost certainly be looking at a promotion, and (much like the Oilers did with Scott Howson) allowing him to discuss it with the Leafs' search team would have been the high road.

Now, Florida is paying Nieuwendyk, so they're certainly within their rights. That said, their action seems petty, and will eventually be ineffectual anyway, since Nieuwendyk can talk to whoever he wants on July 1. It's hard to say who the Panthers are childishly snubbing; Nieuwendyk for quitting or the Leafs for a multitude of sins. Regardless, it is yet one more classy act from an organization that rivals the Islanders as the NHL's nut house.