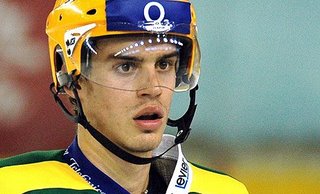 The Edmonton Oilers have signed Josef Hrabal to a 2-year, entry level contract. Somewhere, Mathieu Roy has a sharp feeling of impending doom that he can't quite explain.

Hrabal has been a tough fish for the Oilers to land. From Guy Flaming's 2007-08 Euro review over at Hockey's Future:

Defenseman Josef Hrabal played another season for Cherepovets in Russia and was good enough that the Oilers recently attempted to sign him. Unfortunately, negotiations have gone nowhere with the player’s agent asking for more than what the Oilers feel comfortable with and so the Czech rearguard will go unsigned by June 1, thus becoming a free agent.


As of that wasn't enough, here's what Guy said a year ago:

As a former eighth-round pick of the Oilers back in 2003, the fact that Hrabal is still even on the radar should be considered somewhat of a success. The Czech product has gotten better each and every year since he was drafted and 2006-07 was no exception. Hrabal began the year playing for Vsetin in the top Czech league but ended the schedule in Russian skating for Severstal. Combined, the defenseman had 19 points in 45 games – a higher point per game ratio than Grebeshkov had despite being two full years younger.
The Oilers tried to ink Hrabal’s name to a contract before June 1 in order to keep his NHL rights but were unable to do so and therefore the Czech product will re-enter the 2007 draft.

The Oilers depth chart now looks something like this:

I'm assuming that based on age and professional experience, Hrabal can be considered ahead of Chorney at this point. While there is no pressing need to bump him up to the big club, I can't see the Oilers opening the season with 8 defensemen on one-way contracts; Lowe was loathe to expose Roy to waivers last year, and he likely will be again this year.

Best bet: Hrabal sees Allan Rourke minutes this year, although if he shows a lot in camp he could force the Oilers to trade a defender.