Georges Laraque in the News

Share All sharing options for: Georges Laraque in the News 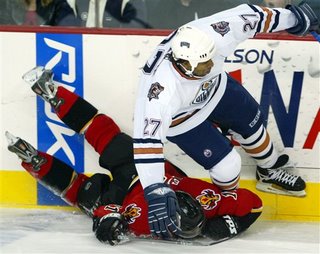 Georges Laraque has always been the kind of player that the majority of fans love, and for more than just his fighting. His exuberance, his attitude in interviews, everything about Laraque is likeable when he's playing for your team.
-
I met Laraque once, a few years back, at the first NHL game I attended in person. There was a big line of fans waiting for autographs, and the woman in front of me wanted a picture with Laraque. The fellow taking the picture couldn't get the camera to work but Laraque just smiled and waited patiently.
-
Earlier in the lineup, a guy in a sweatshirt came up to get a Laraque autograph. His "friend" at the bar (wearing a Canucks uniform) yelled out across the room, "Hey, you could take him, he doesn't look that big." The guy got nervous and Laraque gave him a big smile and an autograph. I was only 16, and it was a lot of fun for me, the best part of the game actually (a 4-2 loss, after a Mike York goal that would have tied the game at 3 was disallowed).
-
Hockey.com has an article up about Laraque's off-ice efforts (likely because of his nomination for the King Clancy award). There is a lot of good stuff there, stuff you aren't neccessarily ecstatic about if you're Laraque's boss, but things that are good to hear:
-
"At the end of the day, what really defines you? Is it how much money you make? How many Cups you've won? No, what matters is your community. There are people out there without parents. People who can't afford to go to a hockey game. People who can't afford cable to even watch a hockey game."
-
"When I retire, I don't want to be remembered as a fighter, as a goon. What's more important? Winning a Cup? Beating up guys? Or being there, trying to make a difference?"
-
Writer Marty Henwood also includes the following anecdote:
-
A few years ago, Laraque was toiling for the Edmonton Oilers and the team had just arrived in Calgary for a game. Laraque had not even unpacked when he took a phone call in his room. There was a young man named Jordan fighting muscular dystrophy in Edmonton and they weren't sure he was going to make it through the night. His dying wish was to meet Georges Laraque. That's it. Meet Laraque, say goodbye to his family and go to sleep. In that order.
The big guy checked out of his hotel and rushed north towards Edmonton, cutting an hour off the two hour, forty-five minute jaunt in the process. It, like all the others, was a request he couldn't, or wouldn't, turn down.
-
There are not a lot of athletes out there like Laraque, guys who really want to do good in the communities around them, guys who embrace the spotlight and use it to help. His off-ice actions, even more than his on-ice play, are what Laraque deserves to be remembered for.