The Future of Most Prospects

Share All sharing options for: The Future of Most Prospects 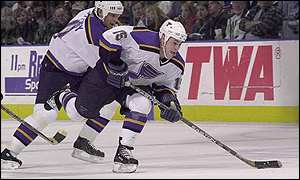 This is Marty Reasoner as a St. Louis Blue. On the night this photo was taken, Reasoner had scored 2 goals and assisted on a third against the Dallas Stars in Game 1 of the Western Conference Semifinals against Dallas. Reasoner had just turned 24, he was a prospect with gorgeous college and minor league numbers, and in just over 90 games already had just shy of 50 points.

In August of 1998, Hockey's Future wrote the following about Marty Reasoner:

Reasoner's game has been picked at with a fine-tooth comb and the scrutiny hasn't always been positive, i.e. he is not physical enough, not a vocal leader, a "Craig Janney type", a backhanded compliment if there ever was one.
Make no mistake, Reasoner's skills are blue chip and he will be a productive NHL player, the only question is will he level out at the Janney stage or will he become a true #1 NHL center.
For those of you who are interested, Janney scored 751 points in 760 games.

In September of 1999, Hockey's Future said this:

. Marty Reasoner was a model of consistency during the first week of camp. He showed how hard he has worked on the defensive side of his game, and as always, displayed his playmaking ability offensively. Marty is on the verge of a breakout season, whether it is with the Blues or not is still in question.

In July of 2001, immediately after coming over to Edmonton in the Doug Weight trade, we get the following, again from Hockey's Future:

Reasoner has to be the wild card in the trade. It is at center that the Oilers have their least amount of depth, or maybe more accurately, their biggest question mark. Reasoner has all the tools to be an impact player; he has a pinpoint shot, excellent offensive instincts, and great speed. His problems are his defensive play and inconsistency. Perhaps the Oilers are willing to live with his defensive lapses if he generates enough offense, but they can't have a player that only shows up half the time. It also remains to be seen if he has the ability to play against the other teams top checkers.

So how does a prospect with offensive instincts and troubles with his defensive game and consistency turn into a checking forward? Because listening to these descriptions of Reasoner (Lack of foot speed, inconsistent, unable to check), he sounds a lot like Rob Schremp.

There's a combination of reasons. Injuries certainly played a role. Reasoner has suffered a multitude of injuries to his shoulders, wrists, knees and ankles, and he wasn't blessed with good foot speed to begin with. That lack of speed is what will eventually force him to retire in my opinion, probably some time in the next three years.

Also, Reasoner was forced to adapt his game to the NHL level to survive. Doing so meant being less able to cheat to offense, and undoubtedly this cost him some point production. It made him a better player, a multi-dimensional player, but it hurt his numbers.

The point of this article is that potential is often not realized. Reasoner, a former first round pick and blue-chip prospect, blessed with all the offensive instincts of a scoring star, is now dismissed as somebody who can't score, someone with no offensive ability. Prospect fans suggest he's taking a roster spot that should go to a prospect like Rob Schremp, or using ice time better spent on Andrew Cogliano or Kyle Brodziak. They don't realize that even the most offensively gifted prospect can turn into Marty Reasoner. If he makes it at all.